A Derby fashion designer has drawn on his memories of walking to the Baseball Ground on Saturday afternoons to announce the launch of his new clothing collection, which has been inspired by the golden age of 1970s football.

Karl Shaw, boss of city label Mr Shaw, has officially unveiled his latest vintage range, called 75 Collection, which will add a new selection of T-shirts as well as a pair of shorts and a windbreaker to the Mr Shaw range.

All of the items pay tribute to the Rams’ 1970s iconic blue and white kit and the distinctive three-stripes numbers font, which made its debut on football shirts in the same decade.

Shaw has named the collection after the year he was born, but wanted the photo shoot to reflect 1970s football and Derby County’s glory days around the time of his birth, which have endured in the memories, photos and footage that have now become part of the club’s folklore.

Although the stadium is now long-gone – Derby’s last-ever season there kicked off 25 years ago this summer and it was demolished in 2003 – Shaw says that the spirit of the Baseball Ground lives on in the streets and alleyways in Normanton and Osmaston that fans used to walk along before and after every game. 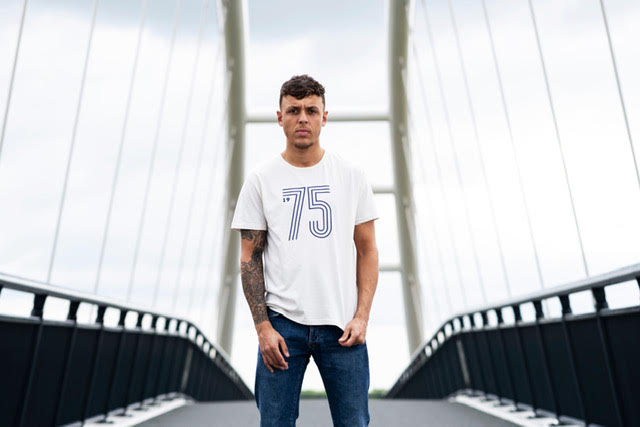 He revived his own memories by revisiting a bridge which brought fans over the railway and past a mural which still pays tribute to the Rams a quarter of a century on.

He also conducted another photo shoot on the new footbridge taking pedestrians over the A52 from Meadow Lane in Chaddesden to the Wyvern, which promises to become a well-known matchday landmark when fans are admitted inside Pride Park once again.

He said: “I’m extremely proud of this new collection because while 1975 is a special year for me, it’s also a time which is rich in nostalgia, especially for Derby County fans and anybody who understands the history of the city.

“Every aspect of the design relates to that era and since I like to reflect the spirit of each collection in the photoshoot, it made sense to explore the streets around where the Baseball Ground used to be, because the walk to the stadium with mates or your dad was a pre-match ritual in itself.

“Thousands of fans must have walked over that railway bridge down the years and during the glory days when the biggest clubs in the world came to the Baseball Ground.”

Shaw, who also runs Derby design agency Silver Birch Creative, founded Mr Shaw in 2016 and his earlier pieces reflected Derby’s night-life by name-checking much-loved venues such as The Dial, Sadler Gate and The Trinity, which he also pays homage to at his popular Reminisce club nights.

In common with his other clothing, all of the 75 Collection garments are Fair Wear Foundation (FWF) Certified and made from Premium Organic cotton and recycled polyesters.

Earlier this year Mr Shaw – whose brand ambassadors include Derby County TV presenter Owen Bradley and former Rams full back Shane Nicholson – produced a range of clothing in conjunction with Derby Brewing Company, while it has also been commissioned to supply designer workwear to a host of city firms.

Shaw said: “I’m very proud to call Derby my home and to incorporate its iconic locations in my clothing, but the essence of my 75 collection reaches beyond the city to a time many football fans across the country still regard fondly.

“Even if you didn’t witness 1970s football first-hand, there is a realness and a human connection that I think people recognise that the game has lost, especially in these days of big clubs and their cynical plans for a Super League.

“My 75 Collection won’t bring that back, and nor will it make Derby successful again, sadly, but it’s nice to be able to enter into the spirit of the decade or, if you experienced it first-hand, to be able wear a piece of clothing that makes you reminisce for a while.”

Splendour cancelled because of Covid restrictions

Nottingham bar set to punch above its weight with new VIP area and...