The deal reflects a net initial yield of 6.3%.

The Chancery, which is prominently located in the heart of Manchester’s central business district, provides 50,388 sq ft (4,681 sq m) of Grade A office accommodation across ground and seven upper floors.

The property is multi-let to a range of occupiers including Clydesdale Bank, Duff & Phelps and Sanderson Weatherall.

Freddie Guest, associate director in the investment team at Savills, said: “We are delighted to have advised Topland on this transaction. The building is prominently located in the heart of the city and is perfectly placed to capitalise on the significant rental growth witnessed in the city.

“This is an excellent acquisition for Topland in a market that is so highly sought after.”

Marcus Franklin, investment manager at Topland, said: “We are pleased to have acquired the Chancery at this time; a high-quality building in a very attractive occupational market.

“We see good relative value in multi-let offices in key regional cities at present, particularly where rents are at a considerable discount to prime.

“We look forward to working with the existing tenants at the Chancery and continue to seek similar investment opportunities throughout the UK.”

CBRE represented PATRIZIA on the sale, led by Will Kennon, who added: “Despite the ongoing political uncertainty, we were successful in attracting a wide range of UK and overseas interest eager to take advantage of Manchester’s inherently strong occupational market which continues to outperform all other UK markets.

“This strength is helping ensure high levels of liquidity in the investment market, despite the uncertain political outlook.”

PATRIZIA was represented by CBRE. 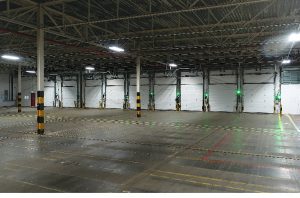 Savills, working alongside B8 Real Estate, has also let industrial space at Knowsley 200 to third party logistics provider Kammac at £600,000 per annum.

The building provides a refurbished, self-contained industrial unit with ground floor office and amenity block. The fully fenced and secure unit extends over a site of 11 acres.

Knowsley 200 is located on Knowsley Business Park, adjacent to the A580 and junction 4 of the M57.

The park is one of the largest employment areas in the UK, comprising more than 1,200 acres of employment land six miles from Liverpool. Nearby occupiers include Matalan, Hermes Parcels and Toyota.

Jonathan Atherton, industrial & logistics director at Savills, said: “The speed at which this deal was concluded was testament to the hard work and determination of both the landlord and tenant to conclude a deal within three weeks. We are pleased to have delivered this significant transaction.”

Administrators prepare to move in to city centre development

Strong start to the year for healthcare property developer