Liverpool is leading the way in the North West with the highest number of new jobs being created in the technology sector compared with other local authorities in the region.

A recent survey of the UK’s tech sector commissioned by NatWest and based on Office of National Statistics figures shows that between 2015 and 2018, 1,875 new tech jobs were created in the city, which is significantly more than other local authorities in the region.

Salford is the second highest ranking in the region for tech jobs with only 1,000 jobs being created between 2015 and 2018. Stockport completes the top three with just 325 new jobs created.

Liverpool’s jobs growth correlates with the growing number of tech businesses in the city, which has seen an increase of 295 new tech businesses between 2010 and 2018, placing the city fifth in the region for new business counts.

Nowhere is this increase in tech jobs more evident than at Baltic Creative CIC, a creative hub that supports the growth of Liverpool City Region’s creative and digital businesses by providing more than 120,000 sq ft of flexible and affordable workspace.

Baltic Creative currently supports more than 180 businesses with 73% of these falling within the tech sector.

These businesses alone have contributed £16.6m in GVA to the regional economy and have supported the creation of more than 600 jobs.

Mark Lawler, Baltic Creative managing director, said: “The success of Baltic Creative over the past decade has shown that there is a real appetite in Liverpool for spaces that foster growth, collaboration and innovation amongst the digital and creative community.

“We’re proud to have played such an integral role in the creation of new tech jobs in the city and we’re looking forward to being able to replicate this in other areas of the city region as we expand beyond our roots in the Baltic Triangle.”

One Baltic Creative-based business that is part of this sector’s growth is Franklin Energy, an electric vehicle charging provider with more than 250 charging points across 100 locations throughout the UK.

Founded in 2015 by Rob Byrne, the business has grown significantly over the past 12 months. Business revenue has increased fourfold, the size of the company’s charging network has doubled and charging point utilisation has increased by more than 300%.

Franklin Energy currently employs five people and plans to hire in line with future growth to have a total team of up to 20 staff by the end of 2021.

The business was part of Liverpool Chamber’s successful Spark Up entrepreneur hub, which was sponsored by NatWest.

Rob said: “We are one of many tech businesses in the city that have ambitious growth plans for our company, products and reach. We recently set up in Ireland and also launched an e-commerce site allowing electric vehicle drivers to purchase a home charging point through our website. 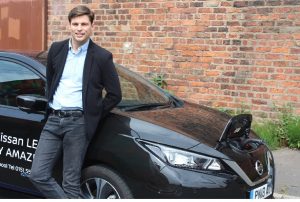 “Our plan is to scale our ‘LiFe’ charging network to 3,000 charging connectors by the end of 2021 and we are currently working on a number of new technologies around smart charging involving battery storage as part of a Department for Transport Innovate UK-funded project.”

The first trial sites are due to go live in Spring 2020 in collaboration with Halton Borough Council.

It runs an Entrepreneur Accelerator Programme, a six-month programme for established entrepreneurs providing advice, mentoring and events to help businesses grow and applications are now open for the next intake of entrepreneurs.

Dan Burton, scale acceleration manager at NatWest, said: “Liverpool is significantly leading the way with the number of new jobs being created in the North West tech sector.

“Helping drive this growth is the increasing availability of support for businesses across the city, whether that’s funding and advice, or the availability of affordable workspace provided by the likes of Baltic Creative.

“At NatWest, we will continue to support tech businesses of all sizes in Liverpool as the sector continues its rapid growth.”

North West at centre of the UK’s nuclear industry