The winners of our annual business awards were announced at a black tie ceremony last night.

And moving tributes were also paid to the man who made Bruntwood one of the most successful property company’s in the region.

Michael Oglesby, who passed away last year, was named ambassador of the year at the awards and his son Christopher was at the event to pick up the prestigious award. 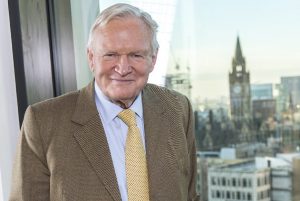 Awards were handed out in thirteen categories to businesses of all shapes and sizes and from a wide range of sectors.

Newcomer of the Year was JP McGuire Developers – which is based in Leigh.

The next winner was Lancashire firm Riverdale Insurance which picked up the award for Contributing to the Community.

The Small Business Award went to Alison Handling – a Preston firm which specialises in plastic containers.

Medium Business of the Year went to Genlec – a mechanical and engineering firm based in Leigh.

The Large Business Award went to Urban Splash, the Manchester based property developer.

Warrington based Alpabiolabs won in the innovation category. The firm specialises in providing drug testing and alcohol kits and also carries out paternity tests.

The winner of the Investment Award was Alpine Fire Engineers which is based in Bury.

Myerson Solicitors, which has its head quarters in Altrincham won the Professional Services category.

Family Business of the Year was Abbey England which is based in Cheshire.

The Fast Growth award was picked up by Omni Resource Management Solutions, which is based in Altrincham.

“The sheer variety of the winners speaks volumes about the health and spread of the business sector in the North West.

“A big thanks has to go out all our supporters who have helped this great event take place.

“The support of our sponsors is invaluable and also our jobs who give up their time to help chose the winners.”