A former police station is set to be transformed into a boutique bed and breakfast facility aimed at Liverpool football fans as part of a £500,000 scheme.

Anfield Police Station, on Anfield Road, dates back to the 1800s.

More recently it was the headquarters of the Anfield Regeneration Project.

But now this impressive building is set to cement its role in Anfield’s future as a boutique bed and breakfast.

They discovered the former police station – just 300 metres from Liverpool’s Anfield ground – for sale and immediately spotted its potential.

Rodrigo Campillo said: “As a developer, when it comes to restoring a piece of history, you can’t ask for much more than this project.

“The police station has everything: The history, the looks, the potential. It has a certain magic that makes it special.”

The plan is to breathe new life into the historic building to create a modern, comfortable retreat, both for football fans and visitors to the city.

WindsorPatania Architects, which has offices in London, Cambridge and Liverpool, will transform the former police station to its new use and has a team trained in the art of reviving old buildings, which, it says, makes it the natural choice for the project.

Known for its innovative designs, WindsorPatania has successfully translated the developers’ vision into a tangible plan. WindsorPatania architect, Roberta Sanna, said: “How should a guest feel, what should they experience when they step into this 100-year-old building?

“These are the questions that drove our design.”

Director Ryan Windsor added: “From day one, our team has been passionate about the heritage of the building. The design respects its history while, at the same time, creating a unique experience for guests to draw people outside of the city centre.”

With the cost of works totalling around £500,000, the project to develop the former police station into a 26-room bed and breakfast/serviced accommodation is now under way, with plans to open its doors to guests later this year.

Rodrigo Castro said: “It’s not just about the building and ourselves as developers, but everyone around the project – the architects, consultants, and contractors, all working towards the end goal of polishing this gem of a building. 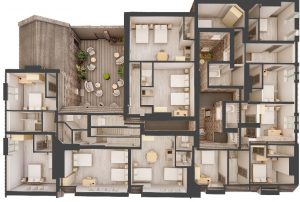 “I remember standing in front of it for the first time in complete awe — this was Anfield, with its history, football club, community, its exciting future. ‘Where do I sign?’,” he said.

Each takes inspiration from the building’s heritage, from the Sergeant’s House, the Guardian’s Wing, the tranquil south and west wings, and the minimalist ‘Cells Experience’.

Lead architect and director of WindsorPatania, Giovanni Patania, said: “The biggest challenge has been to fit a contemporary, functional layout within a 100-year-old structure that wasn’t originally designed with comfort and hospitality at its core.

“After several attempts, and working closely with the developers, we’ve achieved the perfect balance, one that’s been recognised by the Liverpool planning department.”

Engineering consultancy to axe up to 350 jobs