Two landmark sites put up for sale by auction

Two landmark sites have been put up for auction by Newton-le-Willows-based auction house Pugh.

And the former Revolution Bar on Wilmslow Road, in Fallowfield, is to be put up for sale by auction with a guide price of £795,000.

Disused since its closure in 2009, the Grade II-listed Trafford Park Hotel, on a 0.4-acre site, will be sold at Pugh’s next property auction on July 14, as will the former bar site.

Edward Feather, an associate director and auctioneer at Pugh, said: “This is a truly amazing opportunity for an imaginative investor to purchase a unique landmark building that was central to Manchester’s industrial heritage as part of the world’s first industrial estate at Trafford Park.

“Although the hotel has been vacant for over a decade and is in need of a comprehensive refurbishment, it is an incredible building with exciting redevelopment potential.”

An application to convert the building into a 121-bedroom hotel via a five-storey side extension was withdrawn earlier this year and the site is considered suitable for development, subject to planning permission.

Meanwhile, the former Revolution Bar offers bidders the prospect of a partial conversion to residential accommodation.

Edward Feather said: “As the home of the Revolution Bar for years, the building is very well know and it’s in a great location, at the heart of the city’s student area. 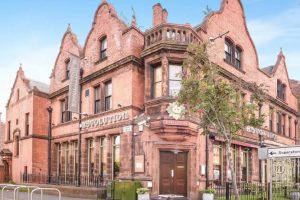 “Manchester City Council have indicated that they would be generally supportive of a residential scheme at pre-planning stage and the upper floors could be ideal for a residential conversion scheme.

“It would be great to see this fantastic building take on a new lease of life as a real asset to this busy area of South Manchester once again.”

Pugh has continued to hold property auctions since the Government introduced social distancing regulations in March by switching its operations to its existing online auction platform. Its April, May and June sales of property and land across the UK generated £7m in sales.

Acquired in 2016 by property consultant Eddisons, Pugh was founded in 1992 and has grown to become one of the largest commercial auctioneers in the UK, selling residential and commercial properties as well as land.