A new attraction has been announced for central Manchester which it is claimed will be an international destination akin to the Tivoli Gardens in Copenhagen, Coney Island in New York and Grand Central Market in Los Angeles.

It will become a permanent urban market and festival space and home to a number of different bars, restaurants, and food trucks, with retail space and a bike park.

There will also be a 70s New York-inspired roller disco, a hidden high-fi audio bar, which will transform into a karaoke venue called Queen Samantha’s, and a retro arcade games corridor.

Among the first traders on board will be Madre, with its own non-traditional, upscaled, ingredient-driven tacos.

Voodoo Ray’s Pizza will launch a Northern outpost following success in Peckham and Dalston, and a favourite of renowned restaurant critic Jay Rayner, Ramsbottom’s pioneering Baratxuri will hold court in the outside space, with a wood-fired ‘Asador’ grill, roasting large cuts of meat and whole fish.

The location will also be Camden Town Brewery’s biggest collaboration outside of London, launching a boutique craft ale bar in partnership with Salford’s Pomona Island brewery.

This will run alongside a specialist wine bar, and a cocktail space from the team behind Ancoats’ favourite neighbourhood bar, The Jane Eyre.

Phase one launches mid-July 2020. The first area to open its doors will be dubbed ‘Platform 15’, a tip of the cap to neighbouring Piccadilly Station.

It has been designed with social distance at the forefront of its operations with a world-leading ‘Safe + Social Manifesto’.

The launch of phase two is planned for August, increasing capacity to 1,000 people with social distancing measures remaining in place.

Once restrictions are lifted, the venue will switch up to a capacity of 2,500 people. At each phase, Escape to Freight Island will add specially-curated food and drink offerings, featuring more of the country’s leaders in hospitality.

The venture is a collaboration of individuals including Justin Crawford and Luke Cowdrey of Volta, Electrik Bar and The Refuge, Gareth Cooper of Festival N°6, event production veteran Jon Drape of Engine No. 4 and managing director Dan Morris, who launched Manchester music venues Gorilla and the Albert Hall, as well as some of the city’s favourite bars and restaurants. 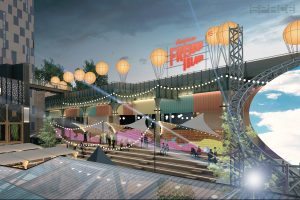 Luke Cowdrey, co-curator, said: “Escape to Freight Island isn’t your average food market. It’s a new and unique destination in Manchester, it is the next evolution in the food market sector that will fill a hole in the life of our city.

“Platform 15 will give a flavour of what is to come when we launch the full Escape to Freight Island experience, so let’s all meet at Platform 15 to begin our escape to freedom.”

James Heather, development director at U+I for the Mayfield Partnership, said: “Mayfield has, over the last three years, been re-established in the hearts and minds of both Mancunians and visitors to our city as an outstanding location for culture and entertainment.

“With Escape to Freight Island, our partners at Broadwick Venues have assembled an amazing line-up of operators, brands and innovators which will take this to the next level.

“This is an exciting new chapter in Mayfield’s regeneration story and one which raises the bar further still for our city’s visitor offering, underlining our vision for Mayfield as Manchester’s true commercial, creative and cultural nexus.”