Drugs use has soared among staff during the coronavirus lockdown, new test figures show.

Warrington-based AlphaBiolabs carries out random testing on behalf of employers and said more than one-in-four UK workers have tested positive for drugs in the past three months.

The company issued a warning to employers and employees as figures showed 26.3% of the workers tested between May and July had traces of drugs in their system.

AlphaBiolabs director, Rachel Davenport, said: “We have been very surprised by the findings, as we have never seen positive rates anywhere near this level before.

“From the second half of March until the end of April, testing virtually ground to a halt as companies put their employees on furlough leave or stopped operating altogether.

“I believe we are now seeing the effects of employees left to their own devices during what has been a very difficult period for society.”

She added: “This, potentially coupled with health and money worries, may have influenced some of the decisions that have been made.

“We can only guess that employees may have slipped into bad habits while they may have been furloughed.

“We recommend that employers inform their staff before they return to work that testing is being conducted, and that they need to consider this and the choices they may be making before returning to work and representing their company.”

Random drug and alcohol testing is carried out by employers to deter staff from misuse and to keep them safe, rather than to catch them out.

Rachel said: “Employees under the influence of drugs could cause significant harm to themselves, their colleagues, the public and the business itself.

“Random testing has been shown to be extremely effective as a means of reducing incidents, ill health, absenteeism and litigation.”

Across the whole of 2019, the average number of positive results recorded by AlphaBiolabs was 14.1%.

The average number of positive results over the past three months represents a rise of 86% compared with the average for 2019 as a whole. 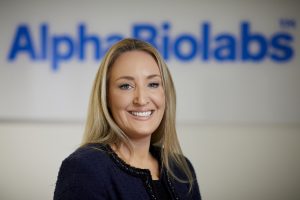 Hair, urine, oral fluid and breathalyser samples are collected by trained staff working at the client company, or by one of AlphaBiolabs’ fully-trained sample collectors.

When a sample produces a positive result on-site, a confirmatory test is carried out at AlphaBiolabs’ laboratory. Traces of drugs can remain in a person’s system for a week or longer.

Positive test results between May and July showed more than one illicit drug had been used in 16.7% of cases.

Cannabis was the most commonly-used illegal substance, followed by cocaine.

Alongside its workplace drug and alcohol testing functions, AlphaBiolabs has set up a COVID-19 testing service to support companies seeking to keep their workplaces safe, reassure staff and maintain business continuity.