Latest UK regional PMI data from NatWest showed a slowdown in the North West’s economic recovery in November, amid the introduction of a temporary national lockdown to curb a second wave of coronavirus infections.

The headline North West Business Activity Index – a seasonally adjusted index that measures the month-on-month change in the combined output of the region’s manufacturing and service sectors – dipped to a five-month low of 50.7 in November, from 52.0 in October.

Notably, however, the reading was still slightly above the 50.0 no-change mark that separates expansion from contraction, and higher than the equivalent UK-wide figure of 49.0.

Detailed data indicated that output growth was driven by the manufacturing sector.

There was a degree of resilience shown in demand for goods and services across the North West private sector in November, despite the new lockdown measures during the month.

The seasonally adjusted New Business Index was little-changed since October and stayed just inside growth territory, contrary to the equivalent UK index. Where a rise in new work was recorded, firms mentioned catching up on projects previously postponed, increased client interest – both domestically and abroad – and successful marketing. By sector, manufacturing saw the stronger rate of order book growth.

Firms’ expectations for future output perked up in November, partially reversing the declines in confidence seen in the previous two months.

Anecdotal evidence showed increased hopes among local businesses of a return to normality over the next 12 months, thanks in part to the recent positive news on vaccines.

That said, sentiment was still slightly below the UK average, with panellists in the North West highlighting fears about the impact of lockdown measures on activity and Brexit concerns.

After having eased in October to the slowest for seven months, the rate of job losses across the North West private sector reaccelerated in November, to show the steepest drop in employment since August.

The decline was broadly in line with that observed across the UK as a whole. Surveyed businesses reported redundancies and the non-replacement of leavers amid efforts to cut costs.

For the second month running, firms in the North West recorded a modest drop in outstanding business – ie orders received but not yet completed – in November. Anecdotal evidence suggested the level of demand was such that there often remained excess capacity at firms in the region, even despite the recent job cuts.

The rate of input cost inflation faced by firms in the North West moved up another notch in November.

The seasonally adjusted index ticked up for the seventh straight month – from a four-and-a-half year low at the height of the COVID-19 crisis in April – to its highest since September 2019. 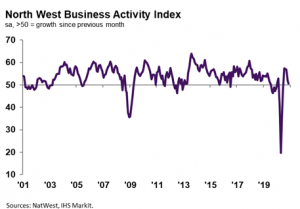 Higher costs led firms in the North West to raise the prices they charged for goods and services for the sixth month in a row in November.

Given the fragility in demand, however, the rate of increase eased since October and, as such, moved further below the level of inflation seen prior to the virus outbreak. Detailed data highlighted particular weakness in service providers’ pricing power.

Also published today, the latest NatWest UK Small Business PMI survey shows a decline in small firms’ business activity for the second month running in November, with the All-Sector Small Business Activity Index registering at 47.4 – up slightly from 47.0 in October. However, news of a vaccine boosted confidence and business outlook at small firms to a 10-month high.

Heather Waters, NatWest North regional board, said: “The recovery in the North West’s private sector that’s been in evidence since the Summer was dealt a blow by the introduction of a second national lockdown in November, as indicated by the PMI dropping to a five-month low.

“Encouragingly, however, regional business activity continued to show resilience in the context of the wider UK picture, helped by another strong performance from local manufacturers.

“A pick-up in the pace of job cuts across the region in November is a concern, as it could act to undermine economic performance going forward.

“However, the recent news on the development vaccines has come as an early Christmas present, helping to boost the region’s outlook for 2021.”

Innovation is key for businesses