Liverpool’s latest student accommodation development, Natex, has achieved a key construction milestone as it reaches its highest point, nine months before it opens to students.

Mount Property Group’s £45m, 574-unit development, with unrivalled views across Liverpool’s historic St George’s Quarter and the city beyond from its upper floors, has reached full height with a topping out ceremony marking the occasion.

The development will not only offer superior, high-end living spaces for its customers, but the communal facilities a modern student expects, including private study rooms, impressive social spaces, a fully kitted out gym, laundry rooms and landscaped gardens for students to enjoy.

Michael Chrysokhou, managing director of Mount, said: “Whilst a challenge, the past year has proven how resilient both the construction and student market is, so I’m delighted to start the new year with such positive news and we look forward to entering the final stages of completion and opening the doors to our student customers for the next academic year.”

The construction milestone also coincides with Barton’s two-year trading anniversary, during which time the fledgling business has made its mark in the North West, working for Mount on Natex and also Innovo House, the 124-unit scheme in Liverpool’s Knowledge Quarter. 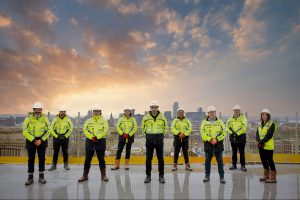 Matt Fawcett, managing director at Barton Group Services and Barton PM, said: “Natex has become a striking addition to the Liverpool cityscape and topping out not only marks a key programme milestone, but gives us a chance to celebrate the hard work and collaboration of the entire project team to reach this stage.

“We’ve been fortunate to continue works on site during the majority of 2020, with COVID-safe procedures in place for our operatives and sub-contractors.

“With the internal fit-out on Block A well under way there is a huge amount of activity currently on site and the momentum will continue early this year with the fit-out commencing on Block B.”

Natex is scheduled for completion in July 2021, in anticipation of students starting the new academic year in September.