“I do want to see favouritism towards the North”, stated Jake Berry MP and chair of the Northern Research Group (NRG) at a recent event hosted by TheBusinessDesk.com in partnership with law firm Squire Patton Boggs.

The event is a precursor to the Invest North conference which will take place virtually on 24 March and looks to set the agenda for what comes next in the North.

It brought two of the conference’s speakers; the former Northern Powerhouse minister Berry and Roger Marsh OBE DL, chair of the NP11 and Leeds City Region Enterprise Partnership, together for a conversation about transforming rhetoric into reality, chaired by Squire Patton Boggs, partner Karen French.

Berry made the bold claim of wanting to see favouritism from central Government because, he said: “It’s impossible to level up by treating everyone the same when one part of our country starts so far behind in terms of investments in infrastructure, skills and jobs.”

He added the NRG – a group of 80 Northern Conservative MPs – have been calling on Government for a “Big Bang revolution” across the North as outlined in its recent report.

This, he explained, would focus on the areas of foreign direct investment (FDI) – replicating the success Greater Manchester has experienced in recent years securing £6bn of FDI; the region’s sector strengths in high tech engineering and manufacturing – calling for changes to the taxation system; and lastly a review and refresh of how the North is governed – namely devolution.

Marsh, welcomed the NRG’s report calling the focus on funding, pace of investments and local decision making, “very compelling.” However, he said what he sees as crucial is the continued collaboration between public and private sectors, which he said “each do things well, but together can do things extraordinarily well.”

The chair of the NP11 added he believes despite a lack of congruence across Government and within departments – a point Berry highlighted – that ultimately local officials and those in the centre want the same thing, “a successful, vibrant, economically contributing, health improved North,” which ultimately counteracts “three decades of underinvestment.”

So, what is needed? For Berry it appears to be “a decade or two of the North being treated differently and just getting more than other areas.” He added: “For Britain to succeed, the North must succeed, but for get us to a point where the North can be as good as we all know we can be, we need at least a decade of public policy favouring investment into northern businesses, northern skills, northern jobs and northern infrastructure.”

Marsh however, who stated he was choosing his words carefully, explained rather than favouritism he preferred to describe what is required as differentiated investment. Namely, for central government to invest where it “will make the biggest return nationally for decades to come.”

As the conversation touched on devolution, Berry highlighted it had clearly been successful in a number of areas and particularly highlighted Andy Burnham, commenting: “He’s a Labour Mayor, I’m a Conservative Member of Parliament, but I know good when I see it and he’s made a huge contribution to Manchester.”

He said he agrees with the Prime Minister’s ambition to complete the devolution picture across the North – something Boris Johnson highlighted in his first domestic speech in Manchester – stating “we need to get on with it.” And he pointed out: “Lancashire would love to have a Mayor of Lancashire, it’s that missing ‘X factor’ in driving our economy.”

Marsh said despite Covid, there was still plenty of money available, so the region needs to make sure it is attractive to investors as it can deliver significant results. He said his example, the Northern Powerhouse Investment Fund – a half a billion-pound fund supporting businesses across the North – showed the power of backing regional businesses. Echoing a view he shared with TheBusinessDesk.com earlier this year he said: “I’d like to see an NPIF 2 or something like it that’s got an extra zero on the end of it.”

Berry also emphasised the importance of supporting the North’s businesses, and said it’s important that there is an incentive for existing firms investing in their businesses and their people to drive up productivity. He said he thinks this can be supported by the tax system.

And what of the new measures announced in Rishi Sunak’s recent budget such as Freeports. Do they do enough or will they just displace businesses?

“Our vision as the Northern Research Group and as northern colleagues is to try and create an environment where the whole of the North is an enterprise zone of a Freeport”, Berry said. “I genuinely think Freeports are going to stimulate new activity.”

For Marsh they go some way towards this goal, but he wants to see more done to ensure connectivity across the North, something Berry also urged. Marsh said that with businesses such as Siemans Mobility investing in manufacturing in region, it is crucial that the connectivity infrastructure which his in place reflects a global trading nation in 2021, rather than something “barely repaired from 1821.”

However, it’s not all trains, planes and automobiles, with the LEP chair stressing that an eighth of the North’s population is not properly connected to the internet. Berry said top of his list of infrastructure investments in the North, “isn’t rail, it’s digital infrastructure.” Marsh agreed, while also noting that transport infrastructure – “isn’t just a nice to have.”

Ultimately both men agree the journey for the North has started but now it is about scale. Marsh closed the discussion by stating that money from central government is welcome. But he asked: “Is it enough to make a massive difference, rather than just perhaps maintaining the status quo?”

You can catch up on the full event below: 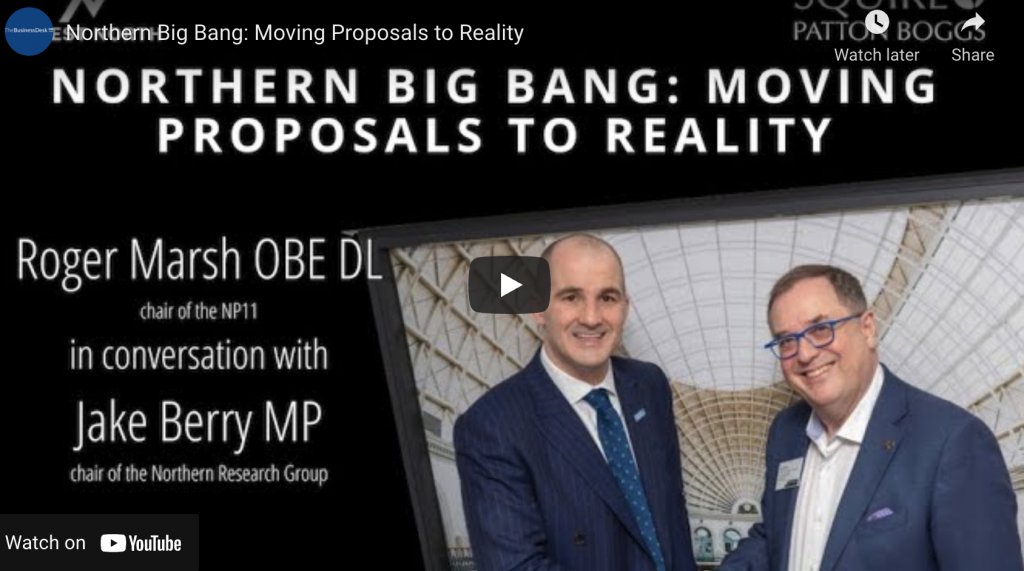 Delay in lockdown easing a bitter blow for businesses