A new partnership aims to support ambitions for Greater Manchester to become the first Net Zero region in the world by 2040, with the planned installation of the city’s first low-carbon hydrogen hub.

And Greater Manchester’s Local Energy Market will see Greater Manchester Combined Authority (GMCA) work in collaboration with the 10 local authorities to draw up plans to increase energy efficiency and pave the way for the installation of new technologies, creating a low-carbon infrastructure which will support all 10 local authorities in the future.

The hub partnership proposal means that, for the first time, sustainable hydrogen fuel will be produced at scale in the region, creating opportunities for businesses in the area to make Net Zero plans with hydrogen in mind.

The collaboration comes after the Government set out its 10-point plan for a green revolution and included hydrogen and fuel cell technology as one of its key ambitions.

Manchester Metropolitan University, Greater Manchester Combined Authority (GMCA), Trafford Council, Carlton Power, Cadent Gas and Electricity North West will be joining forces to set up the hub, which will be a new addition to Trafford Low Carbon Energy Park – a green energy storage facility, which already consists of a number of Net Zero industrial projects in support of government objectives.

The facility aims to help integrate renewable energy on a regional scale through the storage of solar and wind energy, and now through the production and storage of hydrogen.

Cllr Andrew Western, GMCA lead for the Green City-Region, said: “The question of how we generate, transport, and use energy is absolutely fundamental to addressing the climate emergency, and this hydrogen hub is one of the ways we’re answering that question here in Greater Manchester.

“We need an urgent and significant increase in more renewable energy sources to cut emissions and meet our target of becoming carbon neutral by 2038.

“This hydrogen hub has the potential to set the standard for decarbonised energy generation across the North West and put us at the forefront of a UK revolution in clean energy and sustainable industry.”

Amer Gaffar, Director of the Manchester Fuel Cell Innovation Centre, said: “We will be offering businesses the opportunity to connect with leading researchers at the university, as well as experts from this exciting new micro-cluster at Trafford Low Carbon Energy Park, to fully maximise the potential for hydrogen in their business.”

Meanwhile, Greater Manchester’s Local Energy Market project has set out ambitious plans to revolutionise the use and distribution of energy across the Greater Manchester region, supporting a low carbon future with the goal of becoming carbon neutral by 2038.

The collaborative project forms part of the bold vision for the North West; to become a UK leader in tackling the global climate emergency issue whilst supporting a green recovery.

The development of the Local Energy Market consists of a consortium of 12 partners who have appointed Energy Systems Catapult to support the development of Local Area Energy Plans across Greater Manchester. 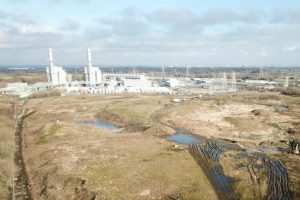 This pioneering approach looks at all types of buildings, transport systems, local industry, local renewable energy generation, storage and distribution assets across the 10 districts to help better understand how our energy could be generated, distributed and used in the future.

This place-based approach brings stakeholders together to ensure at the end of every pipe and wire is an informed household or business making low carbon decisions with the best evidence.

Greater Manchester will also be the first place to utilise a new digital place-based public engagement and consultation process being developed by Energy Systems Catapult, helping inform residents about the low carbon options that might be available in their neighbourhood and receiving feedback and insight about their preferences.

Building on an initial pilot, the first Local Area Energy Plan is being developed for Bury and is expected to be consulted on in late spring, with Salford and Manchester following later in the summer. Each of the other boroughs will follow until early 2022.

Cllr Western said: “This marks a key step in this innovative project being pioneered here in Greater Manchester, and one that will be a key element of our carbon-neutral ambitions by 2038.

“The local area energy plans will help us optimise our energy consumption through localised systems in each of the 10 boroughs, making it more efficient and cost-effective for residents and businesses. This is the first project of its kind to be delivered at this scale.

“This is the smart way forward and working together with our partners we can lay the groundwork for a low carbon future.”

Richard Halsey, capabilities director at Energy Systems Catapult, said: “Hundreds of local authorities have declared ‘Climate Emergencies’ with ambitious targets for getting to Net Zero, but few have credible and investable plans to meet their target or engage us as citizens in what this means for our homes and lives.”