A short film shot on location in Oldham has won best drama at the Out On Film festival in the US – making it eligible for the 2022 Academy Awards.

‘Inertia’, produced by Manchester-based Leapling Films, will also be available to watch on All4 later in the year after being nominated for Best of British at the BAFTA qualifying Iris Prize in Cardiff, Wales.

Filmed over four days the film tells the story of school pupil Rabia, played by Payal Mistry, and teacher Maddie (Joanne Mitchell) who become friends after Maddie loses her wife, Leigh, due to an incredibly rare natural phenomenon.

The film is shot in four locations across Oldham including Rossendale Nature Reserve, Broadoak Community Centre and Diggle and features a cast of 20 professional actors and extras from across the North West.

Out of 7,000 film festivals worldwide, only 63 have Oscar-qualifying accreditation and the film will now be submitted for judging by members of the Academy for Best Live Action Short Film.

Mat Johns said: “It’s amazing that the film is now eligible for the Oscars and the BAFTAs. I’m so proud that our team’s hard work and my hometown of Oldham will be seen in a film by members of the Academy.” 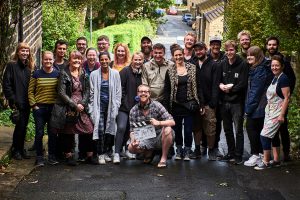 Chris Lane said: “Mat and I are looking to shoot our first feature next year and, based on the success of Inertia and our previous short, A Father’s Day, it shows that we, and the team around us, can deliver consistent quality.”

Chris and Mat are continuing to develop a slate of feature films across the genres set in the North of England, but for the foreseeable future, they will be looking to finance a low budget horror drama via Leapling Films, called ‘Amira’.