Salford Mayor, Paul Dennett, has been announced as the new deputy to the Mayor of Greater Manchester, Andy Burnham, in a wider role in the city region.

In addition to Baroness Beverley Hughes, the Greater Manchester Mayor also appoints an additional deputy mayor from amongst the 11 members.

Mayor Dennett retains the housing, homelessness and infrastructure lead role for Greater Manchester as the portfolio holder. While also supporting the Greater Manchester Mayor with the work of the combined authority, he has been asked to serve, along with Cllr Andrew Western and Cllr Brenda Warrington, leaders of Trafford and Tameside councils, respectively, as part of the Bee Network board to ensure authorities are represented in this important work.

Mayor Dennett said: “It is a huge honour and privilege to be able to support Andy as his deputy. This role provides a huge opportunity to continue with our partnership working across the city region, building on our successes to date, whilst continuing to deliver real results for our residents, communities and partners across Greater Manchester.

He added: “I am also pleased to be continuing to lead the housing and homelessness portfolio for GM and pledge to keep a focus on providing safe, decent, accessible and affordable homes for the people of Salford and Greater Manchester.”

Meanwhile, a call for new members to serve on the Liverpool City Region Innovation Board, the first sub-regional board of its kind in the UK, has been made by Liverpool Metro Mayor Steve Rotheram.

Chaired by Dr Jon Hague, vice president science & technology for Unilever Homecare, and facilitated by the LCR Combined Authority, the board’s purpose is to drive the commercialisation of specialist knowledge, maximise innovation-led investment, and accelerate growth and international competitiveness across all sectors of the LCR economy.

The Innovation Board’s primary objective is to realise the city region’s headline ambition to secure R&D investment equal to five per cent of LCR GVA by 2030 – almost double the national target.

Steve Rotheram said: “Our region has a long history of innovation, a wealth of world class research assets, and world leading capabilities in infection, materials chemistry, AI and net zero innovation. But I don’t want us to rest on our laurels. We have to keep building on and developing our strengths to maintain our place as a global leader. 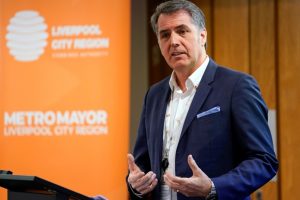 “That’s why our Innovation Board is so important. Our innovation is the key to driving both local and national economic growth and will help us to attract lots of highly skilled, well paid jobs to the region.”

The board would like to hear from senior business/trade body representatives and/or experts focused on AI/technology, infection/health innovation, chemistry/materials, net zero/clean growth, IP, or commercial investment, who are keen to be actively involved in delivering its ambitious agenda.

The Board is keen to ensure diverse representation, meets four times a year, interacts closely with other LCR sector boards, and offers no remuneration for membership. The closing date for applications is 10am, Tuesday, January 4, 2022.

Social Chain MD joins board of tech platform Your FLOCK