The agreement will see the A350F begin replacing the airline’s existing B747-400F fleet in the fourth quarter of 2025.

Airbus employs around 4,500 staff at its Broughton plant, near Chester, which makes wings for all its commercial aircraft.

Christian Scherer, Airbus chief commercial officer and head of Airbus International, said: “We are honoured by Singapore Airlines’ vote of confidence in the A350F as it renews its freighter fleet.

“The A350F is the world’s all new large freighter and will be unmatched in its market segment in terms of operational efficiency, lower fuel consumption and CO₂ savings.”

He added: “It is gratifying that Singapore Airlines recognises the value of the A350F as we build on the strong partnership we already enjoy.”

Earlier this year Airbus received board of directors approval for a freighter derivative of the A350 designed to meet the imminent wave of large freighter replacements and the evolving environmental requirements, shaping the future of airfreight.

The A350F will be powered by latest technology, fuel-efficient Rolls-Royce Trent-XWB97 engines.

As part of the world’s most modern long range family, the A350F will have a high level of commonality with the A350 passenger versions.

With a 109 tonne payload capability, the A350F will serve all cargo markets. The aircraft features a large main deck cargo door, with its fuselage length and capacity optimised around the industry’s standard pallets and containers.

More than 70% of the airframe will be made of advanced materials, resulting in a 30 tonne lighter take-off weight and generating at least 20% lower fuel consumption and emissions over its current closest competitor.

Meanwhile, the ACJ TwoTwenty, launched just over a year ago and aimed at private and business jet users, completed its first flight from the Mirabel Airport on December 14. 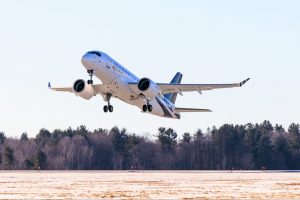 The production test flight was performed by Christophe Marchand and Adam Mason as test pilots and supported by Romuald Scheling as flight test Eengineer.

The aircraft will be delivered to Comlux in the coming weeks and then outfitted with a VVIP cabin by COMLUX in Indianapolis, USA after the delivery.

The ACJ TwoTwenty is a new value proposition to business aviation buyers.

It combines intercontinental range enabling the aircraft to fly up to 5,650 nm/10,500 km (over 12 flight hours), unmatched personal space providing comfort for each passenger with 73 sq m/785 sq ft of floor space.

The ACJ TwoTwenty is the only business jet featuring six wide VIP living areas, of around 12 sq m/130 sq ft each.

Some 200 Airbus corporate jets are in service worldwide, flying on every continent, including Antarctica.