Bolton Council’s planning officers have recommended approval for Peel L&P’s restoration and redevelopment of Hulton Park into a sport and healthy living destination.

Peel L&P has made several alterations to its plans, after public consultations, which it said would create a new international sports destination and resort, bringing a wide range of health and wellbeing benefits to the community, creating more than 1,000 jobs, providing a mix of housing and a championship-grade golf course that will underpin a bid to host the Ryder Cup.

Having reviewed feedback on a scheme approved by the Secretary of State in 2020, Manchester-based Peel L&P launched a refreshed vision for the Hulton Park site last summer, followed by further tweaks.

The notes to the council’s planning committee say: “This case is stronger for the proposed development than it was for the consented scheme and reaching an overall conclusion that the cumulative benefits that would arise because of the development would clearly and significantly outweigh all harm identified and that the proposals would have a positive and transformational effect on Bolton and the wider Greater Manchester region, and it is a genuinely unique opportunity to secure long lasting and wide ranging benefits.”

Richard Knight, Peel L&P’s director of planning and strategy, said: “We are delighted to see that Bolton Council’s officers see the overwhelming benefits of our planning application.

“We strongly believe that our vision for Hulton Park will create a sporting centre of excellence, not only bringing the Ryder Cup to Bolton, but also developing a new generation of golfers and making the sport more accessible. The proposals will allow the public to access the park in a way that has never been possible before, creating new community facilities, public green spaces and new and improved footpaths and cycleways throughout the site.”

He said Peel L&P appreciated the feedback and support it received from the local community: “It has evolved considerably since the previous application that was approved by the Council and Secretary of State in 2020. It presents a refreshed vision for the site, reflecting local feedback and aspirations.”

Law firm JMW Solicitors has advised Blueoak Estates on the acquisition of a 2.9-acre site in Chester in a deal that will see the delivery of 21 new homes.

Blueoak Estates is a developer of luxury, sustainable homes across the North West. Its latest offering will comprise 10 different house types from one-bedroom to four-bedroom properties.

The Westminster Park scheme will be the first in Cheshire West and Cheshire that will meet the local government enhanced environmental standards. Ecologically diverse, it includes the retention and enhancement of an existing pond, native grassland, extensive hedgerow and tree planting and a large area of open communal space.

Iain MacLean, managing director of Blueoak Estates, said: “This is an incredibly exciting project that will create an ambitious mixed tenure scheme, while enhancing the local environment through aspirational eco-credentials.”

Thomas Pearson, real estate partner at JMW Solicitors, said: “This is a fantastic new scheme and we look forward to supporting the team on unit sales and seeing the plans take shape.”

Iain added: “Initial prep works will begin in January 2022, when we’ll start the careful and sensitive clearance of the site, preserving areas of ecological interest ahead of any construction works. This is a high quality scheme that pushes the boundaries of quality, sustainability, design and development.” 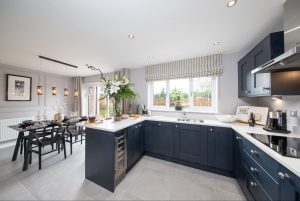 Housebuilder Bellway has acquired 6.4 acres of land on Walshaw Road in Bury, for an undisclosed sum, for a new residential development.

Known as Bridleway Grange, with the name derived from the bridle path that runs to the south of the site, the new development will provide 96 high quality homes.

Bellway will deliver a range of two-, three- and four-bedroom homes, incorporating a mix of detached, semi-detached and terraced properties, ensuring the development appeals to first time-buyers, growing families and commuters, as well as those looking to downsize.

The properties planned are part of Bellway’s recently launched Artisan collection. The development is the first in Bury to feature these newly designed house types.

Remediation work onsite is complete and initial ground work is well under way, with the sales launch scheduled for spring.

Hollie Reynolds, sales director for Bellway Manchester, said: “We are delighted to be back building in Bury, this time introducing our beautiful Artisan collection which incorporates carefully considered elevations and luxury design features.

“The location of Bridleway Grange is superb, just over a mile from Bury town centre, only five minutes from the Bury tram stop and a 30 minute drive to Manchester city centre.”

In addition to the new development, Bellway has made several significant financial contributions to the locality, including £275,888 towards public open space and £79,000 towards ecology. 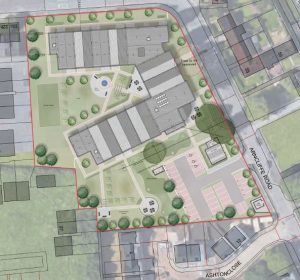 Planning sketch of the scheme

Regeneration specialist Vistry Partnerships has been appointed by housing group Plus Dane for the design and build of a bespoke extra care facility at Arncliffe Road in Halewood, eight miles from the centre of Liverpool.

The 77 properties will comprise affordable apartments primarily for the area’s over-55s community. The former Cherry Tree Children’s Centre, located in Halewood, Knowsley, will also see a series of treatments to make later living more accessible, including a salon, bistro, treatment room and communal lounge. Associated staff facilities will also be incorporated into the facility, alongside car parking, landscaping, and guest suites for visitors.

As a result of a competitive tender from Knowlsey Council to purchase the land, Vistry Partnerships, which has a Warrington office, has supported Plus Dane with the detailed design of the properties, appointing JDA as the architect, and Sutcliffe Liverpool to drive structural and civil engineering.

Following planning approval in August 2021, the team has continued with the design development and is excited to be starting on site this month. Huyton-based Fusion21 has also been appointed to support Vistry Partnerships in delivering social value impact over the course of the build programme.

Vistry Partnerships’ managing director for the North West, Ian Hilliker, said: “This bespoke, purpose-built extra care scheme is another part of our ongoing partnership with Plus Dane. The facility will provide more than just new homes, but a new community for the area’s over-55s, and we are thrilled our partnership has allowed us to bring this under-utilised site back to life for a new purpose.”

Chris McAllister, development director at Plus Dane Housing, said: “We’re really excited to be working with Vistry Partnerships to provide quality affordable homes for residents in the local area as part of Knowsley’s focus on increasing the range of extra care facilities in the borough, as well as providing training and employment opportunities, both during the construction phase and once completed.” 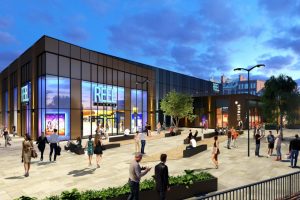 Latest plans for the scheme

Work is set to start on January 24, on the £23m Pioneer Place leisure complex that will transform part of Burnley town centre.

The scheme, which will include a seven-screen cinema and five retail and leisure units plus a 226-space car park, is set to be completed in late summer 2023 and opened in the autumn of that year.

The multi-screen cinema will be operated by REEL Cinemas which will continue to operate from its current site in Manchester Road, Burnley, until it moves to Pioneer Place. The Manchester Road site will then be re-developed for occupation by supermarket chain Lidl. The adjoining Star pub will remain unaffected.

It is estimated the construction of Pioneer Place will support around 180 jobs, with a further 100-plus jobs being created in the cinema and supporting food outlets.

The work will be carried out by the council’s development partner, Maple Grove Developments, part of the Preston-based Eric Wright Group.

Burnley Council leader, Cllr Afrasiab Anwar, said: “It’s fantastic to see this major project get under way. Burnley Council has been determined to forge ahead with this exciting and ambitious project and now it is becoming a reality.

“Pioneer Place will bring new visitors to Burnley town centre during the day and into the evening, deliver new jobs and support the growth of the rapidly expanding UCLan campus. It will help diversify what the town centre has to offer to local residents and visitors alike and help boost the local economy.”

Nik Puttnam, senior development manager at Maple Grove Developments, said: “The partnership with Burnley Council has overcome a great number of challenges to reach this point and the project team must be congratulated for their unwavering commitment to the scheme and to the continued regeneration of Burnley town centre.

The town centre, including businesses adjacent to the site, will remain open as normal throughout construction.