More businesses have spoken out about the latest plans for Liverpool’s City Centre Connectivity Scheme.

Under new amendments suggested by the council, buses could be given the green light to travel in both directions on the key Lime Street route, if approved by the Environment and Climate Change Committee on Tuesday, January 25.

The council’s highways and transportation team were tasked with undertaking a review of the Lime Street scheme following the original contractor going into administration last autumn.

The latest proposals will require an extra £1.5m due to the pre-Christmas safety works which were necessary when the contractor went into administration.

Bill Addy, CEO of Liverpool BID Company, has already raised concerns following the latest moves, saying the ongoing disruption could impact on city centre recovery and he called on the council to keep businesses informed of changes.

He said: “While disruption continues, business is paying a price. There is confusion for people trying to get in and out of the city centre. The pathways are not accessible. The main gateway to the city is a building site and that impacts on confidence. At Liverpool BID we have worked tirelessly to support city centre business, across retail, hospitality and culture to weather the storm of the past two years, but that they have to face another six months of disruption is disheartening and discouraging.”

Now, bosses at the St Johns Liverpool retail centre, situated directly on the Lime Street link, say they are concerned about the continued uncertainty and delay that the redesign poses for the centre, particularly at a time when businesses within St Johns are focusing on recovery.

And they have called on the council to publish its modelling data behind the latest changes.

They point out that, under the new plans, St Johns’ car park will be accessible via Elliot Street and Skelhorne Street, but with no route available from Lime Street, as had previously been the case – a significant change to the original design which has been planned and approved.

They said St Johns has previously consulted at length with the council and are “disappointed and surprised” that changes are being proposed at this late stage.

Neil Ashcroft, centre manager at St Johns Liverpool, said: “Our concern is not just for the centre itself, but for the many businesses, theatres, museums and cultural venues in the surrounding areas that rely on the easy accessibility of parking in this part of the city centre. 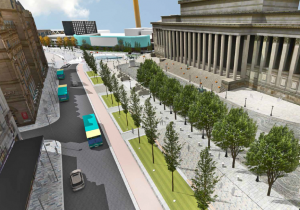 “These new plans may well translate to increased journey times for those travelling by car, which will, in turn, have a negative impact on emissions.

“To understand how the revised scheme will work for shoppers, workers residents and visitors, we need the highway modelling data to be made public.”

He added: “The Connectivity Scheme has always been about creating an improved experience when travelling around the city and we are keen to have assurances that this is still being achieved under the new plans.”