Traditional steak restaurant group, Hawksmoor, is to open its latest outlet, in Liverpool, later this year.

The site will be based in the iconic Grade II-listed India Buildings, on the corner of Brunswick Street and Fenwick Street in the city’s business district.

Fresh from opening ‘the hottest steakhouse in New York’ (Eater) last year and and ranking Number one in the ‘World’s Best Steak Restaurants’ list, co founder Will Beckett said: “We‘ve spent lots of time in Liverpool over the years, and it’s one of the most exciting and dynamic cities in the country.

“We’ve found a beautiful, listed building in such a great location.

“It’s an amazing site, we’re really excited to do it justice by building something really special. We have made lots of friends in Liverpool, many who run and own some of the fantastic independent bars and restaurants that make Liverpool tick, and have been such a key part of the reputation Liverpool has developed in the last few years.

“We’ve been talking to them for a long time about how we can build a restaurant that would really fit into this city.”

The India Buildings owner, Legal & General, said: “L&G are really pleased to welcome Hawksmoor to this truly outstanding Grade II-listed building, and are excited to see the further transformation of India Buildings through the tenant fit out of this and the adjacent banking hall unit, where tenant discussions are ongoing.” 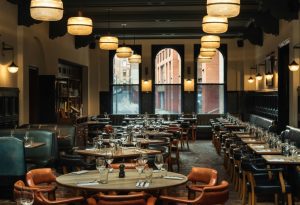 Interior of the Hawksmoor Manchester site

Childhood friends, Will Beckett and Huw Gott, set up Hawksmoor in 2016, serving steaks from traditionally-reared cattle and sustainably sourced seafood, alongside old school cocktails in a then unfashionable part of London.

Since then, Hawksmoor has grown to include seven restaurants in London, one in Manchester, one in Edinburgh and one in New York.

Will and Huw’s obsession with flavour and ethics has led them to collaborate with, and highlight, individuals and companies who share their beliefs, from Brixham fishermen to One Water as well as to the restaurants being given the highest rating for sustainability by the Sustainable Restaurants Association.

Sandwich-maker extraordinaire opens his own outlet in MediaCity