Mancunian property developer Views has confirmed submission of a planning application to Manchester City Council for its ambitions plans for a Levenshulme site.

It proposes to transform 764-786 Stockport Road into a mixed-use development with 9,000 sq ft of retail and leisure space on the ground floor and 30 apartments on three upper floors.

The proposed development, for which a public consultation was held in February this year, will replace the existing unoccupied buildings on the 0.21 hectare site to create a sustainable scheme providing nine new commercial spaces for local entrepreneurs and 10 one-bedroom and 20 two-bedroom new homes.

The final development, set in high quality landscaping, will have a gross development value in the region of £7m.

Patrick Sheridan, senior development manager at Views, said: “We are very excited about our plans for 764-786 Stockport Road and we realised it was important to share them with our local neighbours before we submitted a formal planning application, and most of the responses to the consultation were supportive.

“764-786 Stockport Road has the opportunity to offer a more diverse retail offering that meets the needs of the flourishing Levenshulme community.”

Designed by Manchester-based Ollier Smurthwaite Architects the proposals are conceived as three buildings which step down from four to two storeys to tie in with the buildings either side. High quality materials, large areas of glazing and refined detailing will deliver a building of merit and provide further regeneration benefits, said Views.

Avison Young is the planning consultant on behalf of Views. 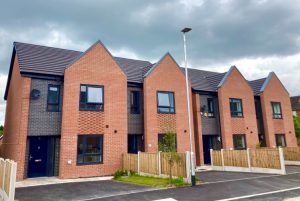 EQUANS and The Riverside Group have completed work on 41 affordable homes on Bowness Road in Middleton, Greater Manchester.

The £5.8m new-build scheme consists of two- and three-bedroom homes, as well as two-bedroom bungalows.

The homes have been built on a brownfield site, which was previously home to the Falcon pub. Housing group Riverside delivered the homes with funding from its strategic partnership with Homes England, the Government’s housing and regeneration agency.

EQUANS completed the scheme in partnership with Riverside and this development is part of the joint ongoing commitment to investing in the local area.

The completion of these homes in Middleton follows the 28 new affordable homes recently constructed as part of the Newby Drive development in July 2021.

The new development also features new community features that will benefit local people, including a children’s playground and a public green space. As part of the scheme a community project was led by EQUANS and Riverside, fitting a new kitchen in the Burnside Community Centre. EQUANS has also been committed to carrying out work in the local community such as work experience for local people and careers events in local schools.

Steven Gregory, construction director at EQUANS UK & Ireland, said: “We’re pleased to have finished work on the Bowness Road scheme in Middleton, a scheme which has turned unused land into much needed affordable homes.”

Julie Gray, Riverside’s head of development, said: “This development is part of our ongoing commitment to transforming lives and revitalising neighbourhoods. We have pledged to build 760 affordable homes this year and these 41 homes are part of that promise.” Mobica has regeared and extended its commitment in 5,200 sq ft at Crown House Wilmslow, in a deal brokered by property consultants OBI.

Mobica, the Wilmslow-based global technology company providing software engineering and development capabilities through Talent-as-a-Service (TaaS), has rationalised its footprint at Crown House to occupy 5,200 sq ft. As part of the new way of working, Mobica recognised the importance of retaining an office presence while realigning its workspace in line with hybrid working. OBI was appointed to deliver and managed the project fit-out.

Andrew Crabtree, transactions and asset management at OBI, said: “It’s been great to work with Mobica on their new workspace. We have been able to deliver a collection of OBI services known as ‘The OBI Difference’ working closely with the Mobica team on designing and project managing their new office space as well as negotiating their new lease.”

Michal Kaczmarek, global business support and real estate manager at Mobica, said: “We had our office re-designed and refurbished to reflect our need for a modern and flexible working space.”

Adam Jackson, leasing director at Orbit Developments, said: “Mobica recognised that the physical office was still essential to the operational needs of the business and that by investing in a refreshed and inspirational fit-out, hybrid working could be embraced.”

Crown House, owned by Orbit, is located in the heart of Wilmslow town centre in Cheshire. A short walk away from the building is Wilmslow train station, high street, and leisure amenity. Morgan Sindall Construction has celebrated the reaching of two landmark moments in its delivery of an enabling works package and Multi-Storey Car Park and Cycle Hub (MSCP) as part of the total redevelopment of the North Manchester General Hospital (NMGH) site.

Acting on behalf of Morgan Sindall Construction, contractor PP O’Connor recently began the demolition of Limbert House as part of the first phase of transforming the Crumpsall site. This included the Limbert House Nurses’ Home and the infectious diseases unit.

In tandem with the progress in the build programme, Morgan Sindall Construction’s accompanying social value plan for North Manchester has reached a pivotal moment with the launch of its latest Knowledge Quad.

The Knowledge Quad is a multi-purpose training and learning facility located within a live Morgan Sindall Construction site. It delivers value by undertaking activity focusing on the four key areas of skills, education, employment and discovery.

The Knowledge Quad concept began at Morgan Sindall Construction’s £150m Paddington Village multi-project site in Liverpool City Council’s Knowledge Quarter, the scale of which enabled a substantial investment into tackling the worsening skills gap in construction and maximising the socio-economic value of the development.

Morgan Sindall Construction has been appointed to deliver £30m of enabling works ahead of the rebuild, including temporary car parking, asbestos removal, demolition, clinical refurbishment works and a new-build 1,000 space Multi-Storey Car Park and Cycle Hub.

Shaun Jones, Greater Manchester area director for Morgan Sindall Construction said: “Upon our appointment to this significant redevelopment last year, we made clear that we saw our role not just to help reshape the hospital infrastructure but to also do what we could to deliver social and economic change as a result of our work and to support the local recovery from the COVID-19 pandemic.” New research from JLL into the North West’s mid box and multi-let industrial market – units of between 5,000 and 100,000 sq ft – has revealed an acute shortage of space.

Only two-and-a-half month’s supply of space is available, based on current levels of demand, although JLL notes that one million sq ft of mid-sized units are currently being built on a speculative basis.

The multi-let and mid box industrial market Spring 2022, also found that rents for industrial space in this category had increased by 18% in some areas of the region in the year to March 2022.

Rental values have leapt by as much as £2 per sq ft in some pockets of the North West over the past two years. Prime headline rents in Trafford Park had risen to £10 per sq ft at the end of March this year, compared with £8 in 2020. Similar growth has been reported in Warrington – £10 in 2022 compared with £7.75 two years earlier – and in Liverpool, where prime rents jumped from £6.50 to £8.

Land values in the North West have increased substantially, according to the report, with only Greater London seeing bigger growth and JLL predicts further rises.

Ruth Leighton, JLL director, said: “Occupier demand has been really strong in the major markets around Manchester, Warrington and Liverpool and with relatively modest new development across the multi-let and mid box sector – reflecting the preference of many developers to build big boxes – void rates are low.

“As a result, buildings undergoing refurbishment are often let before works have been completed and, in some cases, new multi-let developments have been entirely let within six months of practical completion.”

She added: “Given these demand and supply dynamics and rental trends, developers and investors have been prepared to pay substantially more for land than previously, with industrial land values in Manchester and Warrington at over £2m an acre. These will require another hike in rents to justify them.” Altrincham-based FK Group and construction contractor for the New Victoria development in Manchester, VINCI Building, have donated a defibrillator to the charity for use when supporting the region’s homeless people.

Over the past year the charity has had to offer emergency health interventions to clients several times – without a defibrillator, they have been very dependent on the speed and assistance of the emergency services. This small piece of equipment has huge implications for protecting the health of Lifeshare’s clients, staff and volunteers.

Barry Plumridge, breakfast coordinator at Lifeshare, said: “This may seem a small donation to some, but for us, having this available quickly and with the significant training we’ve received means we can save someone’s life, if called upon.

“Our relationship with VINCI Building has been overwhelming. The team’s support for our Christmas project, now ongoing throughout the year, is wonderful and with the introduction of other partners, like FK Group, they are demonstrating how businesses can offer much needed tangible support to us as a local charity.”

Matthew Legg, project manager at VINCI Building, said: “This donation is just one contribution we’ve made to Lifeshare alongside a long term package of support. It’s clear that these items of equipment are vital for charities like Lifeshare and we’re very happy to fund this and many other activities where they have the potential make a real difference to local people.”

Laura Keenan, HR director at FK Group, said: “There are many things we take for granted in the corporate world, for example that businesses have basic life-saving equipment on site – especially in our line of work – but actually these can be expensive bits of kit that charities just can’t purchase as standard. We’re really happy to help Lifeshare. VINCI Building got us involved in The Christmas Project and we saw for ourselves how important these items are when they’re not quickly and easily accessible.”

Pottery works to be transformed into 109 new homes

Developer takes back control of business in £68m deal