The British Business Bank’s Start Up Loans programme has passed a major milestone of £100m delivered in the North West. Since its launch in 2012, the programme has facilitated 11,842 loans to the North West’s diverse and thriving entrepreneurial community, making up 12% of the national figure.

The Start Up Loans programme was established in 2012 to help reduce regional imbalances, particularly aiding those who might find it difficult to secure finance through mainstream lenders. The programme provides mentoring, support, and funding to aspiring business owners from diverse backgrounds in every corner of the UK.

The North West received 11,842 loans, worth £106m in total, with the average loan being £8,961. Of these loans, 4,650 (39%) went to female business founders and 1,494 (13%) went to entrepreneurs from Black, Asian or ethnic minority backgrounds. The figures reflect how the programme supports small businesses that reside outside London, and more specifically in reducing social and economic disparities that stifle the accessing of finance.

Recipients of the Start Up Loans programme in the North West include Manchester-based restaurant Marmaris, Liverpool-based pet groomer Dial A Dog Wash and Bolton-based furniture retailer Pretty Dream Homes. Each of these businesses secured £25,000, with this investment filling the funding gap for growth.

Sophie Dale-Black, UK network director, North of England, said: “Surpassing £100m worth of funding to new businesses in the North West is a huge milestone for the Government-backed Start Up Loans programme and a solid reflection of the ambition of the region’s entrepreneurial community. This milestone highlights our commitment to providing ongoing funding to smaller businesses, particularly in areas where there are real social and economic barriers preventing access to finance for those who need support.

“Smaller businesses in the North West are critical to the communities they serve and to the regional economy. The Start Up Loans programme is a shining example of levelling up and a tribute to the diverse range of ambitious entrepreneurs in the North West.’’ 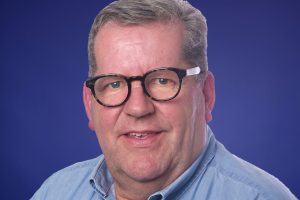 Bolton paving materials business, Hardscape Group, has transitioned to an Employee Ownership Trust, enabling staff to own the business as beneficiaries of the EOT.

Hardscape was founded in 1992 by Mathew Haslam and has become an international business providing paving materials for use in the streets of towns and cities. Going forward, the business will be led by existing directors Alex Warren, Anthony Collins, Chris Wood and Dave Lowe, assisted by a senior management team and supported by Mathew, and Nick Owen, as a newly-appointed independent trustee board director.

Managing director, Mathew Haslam, said: “People are a massive part of why we achieve what we achieve, and with that in mind and to further our company ambitions we are pleased to announce that Hardscape has become an employee-owned business. This creates an enduring ownership structure with tangible employee benefits, resulting in a long term strategic view and increased business investment, for the benefit of our customers and business partners.”

Professional services group Xeinadin, which has a Manchester office, advised Hardscape on becoming an EOT. Its team, led by corporate finance partner Steven Lindsay and Paul Whitney, provided planning, structuring, funding and taxation advice on the transaction. Mr Lindsay said: “Congratulations to
Hardscape on its transition to an Employee Ownership Trust. This deal highlights the ethos and commitment of the company in putting trust in its employees and creating shared value and responsibility. This is a growing trend across the UK and brings many benefits, including easing the succession process and we have now advised on a number of EOT deals.”

The legal advisers were CG Professional and funding was provided by HSBC. 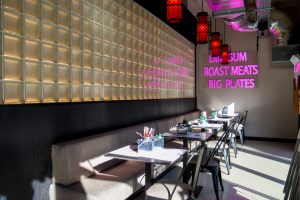 Diners will step into an industrial Asian vibe in the space, with polished concrete alongside hanging lanterns and murals adorning the walls. The spot – above Nell’s pizza and neighbouring recently-opened The Beeswing – also boasts a first-floor outside terrace, overlooking the lush Kampus gardens.

Set up by brothers Adam and Neil Wan, the move is their first expansion outside of their home town, with the duo eager to make an impression and feed Manchester’s love of Asian food. Yum Cha at Kampus is open seven days a week, and Adam Wan said: “We’re properly excited to open the doors and let Manchester taste our big plates, trademark roast meats and dim sum to die for. Our home at Kampus is perfect and we’re proud to be joining the community alongside the likes of Nell’s, Pollen and The Beeswing.

“We’re named Yum Cha after the tradition, passed down over centuries, of gathering to swap stories over tea and food. We’re keeping that culture alive at Kampus, with delicious food and a welcoming dining spot to spend time with mates and family.”

It’s the latest name to open at Kampus, the rental community developed by HBD and Capital&Centric. Adam Brady, at HBD, said: “It’s been a total pleasure watching Kampus come to life this summer with major foodie openings and pop-up events. Manchester can finally get the full Yum Cha experience as they open their doors to their dim sum kitchen – which we’re sure will fast become a firm favourite for lovers of Chinese food.” 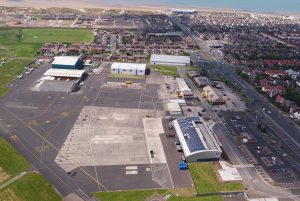 Blackpool Airport Enterprise Zone has topped the charts as the number one Enterprise Zone in the country to award the highest level of business rates relief to local businesses.

According to a Government report that records the Business Rates Relief awarded to businesses by Enterprise Zones in England, Blackpool granted a record £689,000, the largest of any single EZ in the financial year 2020/2021.

Across all the years where data is available, Blackpool ranks an overall ninth out of 277 in the table, behind some of the larger, more prominent EZs in the UK including Waterside, West of England, Science Vale UK, Birmingham City Centre, New Anglia, Solent, Sheffield City region and Aire Valley.

Between 2016 and 2022 Blackpool Council – as the accountable body for the EZ and on behalf of Fylde Council – has awarded a total of £2.7m in business rates relief to 75 local Fylde and Blackpool businesses, creating more long term, sustainable and highly skilled jobs for the local community, and helping businesses to grow and prosper. The council is committed to awarding a further £1.6m in legacy relief until 2027, taking the estimated total to £4.3m over the lifetime of the scheme.

Cllr Mark Smith, cabinet member for business, enterprise and job creation, said: “Blackpool Airport EZ incorporates two existing successful business parks and an operational airport, and as such we have been fortunate to be able to make best use of the business rates relief benefits, helping as many businesses as possible and being able to fill the empty units, which means the business parks are operating at full capacity which is great for the local economy.” 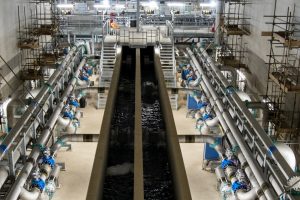 More than 1,400 households in West Cumbria are the first to receive their water from a brand new £300m pipeline and treatment works.

Since 2015, United Utilities has been constructing a 100km pipeline to provide 80,000 households and businesses in West Cumbria with a more sustainable source of water from Thirlmere reservoir, in the Lake District. At the time construction started it was the largest project of its kind in the UK.

A new treatment works and two service reservoirs have also been built. The works at Williamsgate is capable of treating up to 80 million litres of high quality water every day and features the latest technology. The water treatment works will also be able to harness its own green energy from the force of the water arriving at the plant after it has travelled 30km from Thirlmere reservoir, enough to meet 40% of the site’s needs or the equivalent of 175 homes.

The project has provided employment for more than 50 Cumbrian firms and injected in excess of £52m into the local economy. Warrington-based United Utilities has also provided placements for eight young people who were not in employment, education or training and jobs for three apprentices.

John Hilton, project director at United Utilities, said: “This is one of the largest feats of engineering we’ve ever undertaken at United Utilities and I’m incredibly proud of the work that has been done by all our teams and contractors to deliver it. Throughout the project we’ve thought about the local environment we’re working in and have embraced the latest technology to ensure we’ve delivered a treatment works and network that will provide West Cumbria with a more sustainable water supply.”