Supermarket group Lidl has relaunched a public consultation on its controversial proposals for a store on the site of an iconic former Liverpool cinema.

In April last year it announced it wanted to to build a new store at Church Road North in Wavertree, which was the location of the former Abbey Cinema. It said the plans would create around 30 jobs.

The proposal involved the demolition of the old cinema, which had previously been occupied by the Co-op.

Lidl’s regional head of property, Stuart Jardine, said at the time: “Following thorough surveys and assessments of the existing building, it is quite clear that it is beyond economic repair. Lidl is proposing to replace the current premises with a unique store to serve the local community, provide jobs and bring life back to this site.”

However, the plans were dropped following objections to the demolition of the old cinema.

Historic England said, following a local campaign, the “rare survivor from the 1930s heyday of cinema” had been given Grade II-listed status.

Now, the retailer has unveiled revised plans, following feedback from the local community and consultation with a variety of construction experts, which enable the discounter to retain the existing Abbey Cinema building.

It said the significant multimillion-pound investment would see the current site redeveloped into a modern, spacious Lidl store as well as retaining and renovating the façade of the former cinema. The store would have a 1,263 sq m sales area and feature Lidl’s in-store bakery and customer toilets.

Stuart Jardine said: “We have listened carefully to feedback from residents and stakeholder groups, and believe our proposals are the most viable option to revitalise this area for the local community. 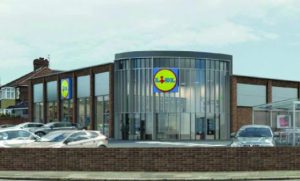 “We are pleased to present the new plans which would not only deliver Lidl’s high quality and affordable produce to residents, but also retain and enhance the former Abbey Cinema building.

“We look forward to sharing and discussing our plans with everyone, and hope as many residents as possible are able to join us in this consultation.”

Residents can view a dedicated website – https://wavertree.expansion.lidl.co.uk – for further details, or call 0800 089 0361 or email lidlwavertree@new-stores.co.uk to comment.

The new supermarket forms part of the company’s ongoing £1.3bn investment across the country in 2021 and 2022.