Under the scheme, which is run by Crown Commercial Service (CCS), the UK’s biggest public procurement organisation, the firm will provide solutions to the public sector. Public sector organisations working with DocTech, which has provided solutions to UK businesses for 38 years, will gain remote access to their documents, with complete audit trails and GDPR capabilities around retention and security of data.

He said: “We’re really pleased to be named as a supplier on the CCS framework. We can now extend our support to many more organisations looking for a secure Cloud solution to digitally manage their documents.

“Some of our biggest installations are from the public sector, meaning we have a real understanding of the bespoke needs and challenges they face. Many are initially looking to digitally store information in a central location but go on to need so much more from us.”

CCS supports the public sector to achieve maximum commercial value when procuring common goods and services, including software applications that are accessed over the internet and hosted in the cloud. It does this by combining collective purchasing power of its customers and its procurement knowledge to get the best deals in the interest of saving taxpayers’ money. 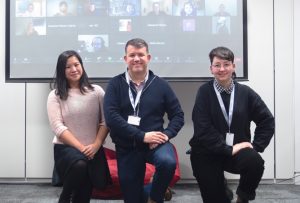 Northcoders, the Manchester-based independent provider of training programmes for software coding and data engineering which also has sites in Leeds, Newcastle and Birmingham, has started 2023 with a bang as it celebrates the very first graduation from its new and bespoke 13-week full-time Data Engineering bootcamp.

The inaugural cohort of 15 people started the course on October 3, 2022, and over the past three months have been developing the skills they need to kick start a long term career in data.

The Data Engineering Bootcamp has been designed and developed by industry experts, including Joe Mulvey – head of data engineering at Northcoders. The curriculum spans a broad range of core content including Python programming, data modelling and analysis skills, and cloud engineering. Moving forward, it will be constantly updated to match the skills employers actually want and will always be delivered in a career-first approach.

As part of the graduation ceremony, students presented in teams of five and showcased their joint end of course project that included extracting data from a fictional company database, reworking it and inserting into a data warehouse ready for analysis. Each graduate has also built up their own portfolio of work to present to potential employers and, alongside their data studies, they have developed strong coding abilities – all of which puts them in a unique position to quickly progress down their chosen career path.

Joe Mulvey said: “The first Data Engineering Bootcamp graduation is a big milestone for Northcoders. The course has been a long time in the planning so it’s fantastic to see this first cohort embark on the next phase of their careers. Our aim is to offer a world leading programme that is always laser focused on developing the skills the tech sector needs. I think we’ve done that and I – along with the whole team – am really proud of our students who are set to become the data engineering stars of the future.” 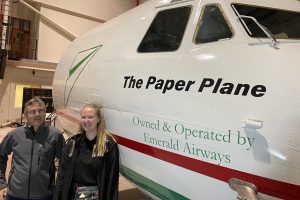 Networx3 has launched a new signwriting and wrapping service as part of its ambitious business expansion plans. Operating from a specialist workshop at Networx3’s headquarters in Burnley the rapidly growing service has produced vehicle wraps and external signs for major UK supermarkets, churches and museums.

A £20,000 investment in specialist software, such as Illustrator, Photoshop and VersaWorks and a 3D printer has turned an outbuilding into a hi-tech hub producing billboards, signs for airplane noses and wraps around works vans. Networx3 managing director Ian Ashworth said: “Most signwriters are car enthusiasts, not designers, and it shows.

“We wanted to sign write our fleet so that every driver that goes past a Networx3 van does a double take because it’s a showstopper. We started this in-house but it’s just grown and grown. There’s clearly demand for a design-led and creative signwriting and wrapping service that’s not just the same old, same old.”

Recent client work includes external signs for several Aldi stores, banners for the Diocese of Blackburn and signage for display planes at the Avro Heritage Museum, Stockport. The aviation-themed work included new wording on the nose of ‘The Paper Plane’ – a commercial aircraft run by Emerald Airways to transport newspapers from Liverpool to Belfast until its retirement in 2009. 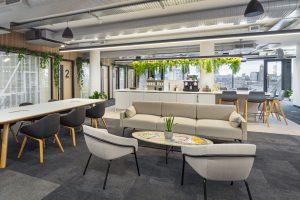 AEW Architects is now B Corp Certified. Manchester-based, AEW bring the total number of UK-based, architecture and design practices with Certification to 16, joining other leaders in the global movement for an inclusive, equitable, and regenerative economy.

B Corporations are companies that meet high standards of social and environmental performance, accountability, and transparency. There are just over 5,900 B Corps globally, with 1,460 of these based in the UK.

To become a B Corp, AEW undertook a rigorous review process that was assessed by B Lab. Applicants are required to achieve at least 80 points out of 200 across five assessment categories (Governance, Workers, Community, Environment and Customers). AEW scored well above average across all categories and achieved an overall score of 95.3, placing it eighth in their industry.

Andrew Rainford, managing director of AEW, said: “The B Corp Certification required a real team effort over the past year and it’s great to see that hard work pay off. With so few UK-based, B Corps in the ‘Architecture design and planning’ industry, we’re delighted to now be counted amongst this leading group.”

AEW’s Sustainability Manager, Peter Bartley, who led the process said: “The certification is testament to our commitment to positively impact all stakeholders — workers, communities, customers, and our planet – and ensure a benefit for all. As we work towards recertification in three years, being a B Corp will provide us with a framework for continuous improvement to further enhance our environmental and social performance.” 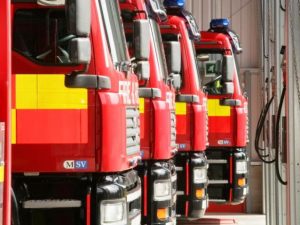 Greater Manchester Combined Authority (GMCA) has awarded funding to Seetec Outsource to create The Blue Light Development Academy. GMCA has awarded nearly £2m to Seetec to establish the academy, with the training programme fully-funded through the European Social Fund (ESF).

The Blue Light Development Academy aims to support blue light staff with career development including leadership skills. There is also a strong focus on personal wellbeing, with programmes available on building resilience and for managers to understand health needs of staff.

Cllr Eamonn O’Brien, Greater Manchester’s lead for education, work, skills, apprenticeships and digital, said: “We are proud of Greater Manchester’s pioneering Skills for Growth programme and all of its achievements, with thousands of employees supported in building their careers. However, we know there are still many industries in the city region who could benefit from fully-funded training.

“The newly launched Blue Light Academy recognises the demanding work of emergency services staff and includes specially adapted courses on how they can manage their wellbeing during pressured situations. This will not only be of benefit to the workforce, but also our residents who will receive a better service as a result.” 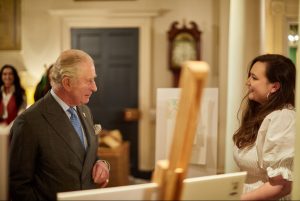 The then Prince of Wales with Emma Rose Atherton

A University of Chester graduate is one of eight designers chosen by The Prince’s Foundation and a world-leading fashion retailer to create a carbon-neutral womenswear collection inspired by royal gardens and showcased to King Charles III.

Emma Rose Atherton, who studied a Master’s of Art in Design at the university, has designed and hand-crafted clothes for the responsible ready-to-wear, luxury womenswear capsule collection, recently launched by the charity and YOOX NET-A-PORTER.

The 13-piece capsule marks the culmination of the second edition of The Modern Artisan, YOOX NET-A-PORTER’s and The Prince’s Foundation’s pioneering flagship training programme – and the first time Highgrove Gardens in Gloucestershire, next to the King and the Queen Consort’s private residence, has served as inspiration for a fashion collection. The Gardens are run by The Foundation, which was established and is presided over by the King. Half of the collection’s Recommended Retail Price is being donated to the charity, to support its innovative training programmes.

Emma, from the Wirral, runs her own size-inclusive label, EROSA, which was recently featured and won an award at Northern Fashion Week. The 29-year-old embarked on The Modern Artisan programme in 2021 after the designers were selected from a competitive international field of students and graduates. During the programme, Emma and her fellow Artisans have been given the opportunity to present their work to His Majesty, then the Prince of Wales, at Dumfries House, headquarters of The Prince’s Foundation in East Ayrshire, Scotland.

Emma said: “I feel so privileged to have been a part of the Modern Artisan. I was encouraged to apply by Delphine Wilson, the Fashion Design Programme Leader at the University of Chester, and am so proud of everything the team achieved over the 10 months. I learned more than I can describe about myself as a designer and maker, and have enjoyed bringing these skills back into my own practice as well as sharing them with Chester students.” 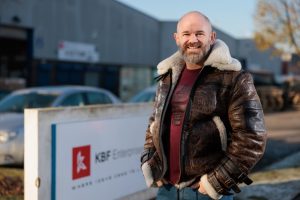 Following the business’s record-breaking year, which also saw its core team grow by 52% to 69 staff, KBF has announced aggressive expansion plans for 2023 to cater to the growing demand for sports nutrition products. These plans follow an impressive trading period for the company’s leading protein brand, Warrior, which saw sales increase by 227%, and record trading end to 2022 following a successful Black Friday and Cyber Monday campaign.

The planned business growth for 2023 includes an expansion of the company’s factory to enable the company to cater to demand while maintaining a competitive price point. KBF Enterprises is also set to expand its international offering beyond the current 2,000 locations, which presently includes Singapore, Canada, Taiwan, Israel, and Ireland.

Founder, Kieran Fisher, said: “Last year was incredibly successful for all of our brands at KBF Enterprises and we are looking ahead to extending this growth trajectory into 2023 and beyond. The sports nutrition category is expanding at a phenomenal rate, and we are constantly seeing new trends and innovations emerge. Our goal, and what we do well, is to continue developing great tasting, high quality products that are also good for you.”