A report by the Northern Powerhouse Independent Review into HS2 says the North and Midlands must take control of their high-speed network and that cancelling the major infrastructure project without credible and viable alternatives will not deliver the transformational benefits to the UK economy this country so badly needs.

Established to inform the Government-commissioned Oakervee review of HS2, which will report to the Department for Transport on the future of HS2 later this week, the Northern Powerhouse Independent Review:

The Northern Powerhouse Independent Review is calling for the establishment of HS2 North – a special purpose vehicle (SPV) on the model of the Olympic Delivery Authority.

This would make it arms-length from government, with private sector delivery partners and Network Rail, overseen by Transport for the North to ensure HS2, NPR and related upgrades are combined efficiently and with maximum value.

While significant benefits to the Northern economy are identified in this review, it is clear that further detailed work needs to be undertaken.

Therefore, the panel is urging government not to make any decisions to scrap all or part of the project until that further economic analysis is complete.

In addition, the true scale of benefits to parts of the North are revealed:

Chris Oglesby, chief executive of property group Bruntwood and member of the Northern Powerhouse Independent Review into HS2, said: “Our report highlights that there are a number of significant benefits of HS2 that have been ignored to date in its viability analysis.

“HS2 will be transformational in equipping the North to thrive in the fourth Industrial Revolution. It delivers massive economic benefits by increasing capacity and speed, both between our cities and into them on both new and existing lines.

“This, in turn, will increase access to the labour markets for high growth industries and drive productivity; as much in enabling new jobs as improving existing ones.

“It will drive regeneration in our cities and towns around the stations and beyond, whilst the stations themselves will also be economic engines in their own right.”

He added: “Our review panel proposes that the North and Midlands must take control of the nation’s high-speed network.

“HS2 and Northern Powerhouse Rail – a major priority of Boris Johnson and his government – are completely interlinked and a joined-up approach is required to both and the upgrades to existing lines.

“Only by delivering an integrated high-speed network right across the North can a Northern Powerhouse vision be truly realised. Further delays and uncertainty are hugely damaging to the North and the country as a whole.”

Cllr Judith Blake, leader of Leeds City Council and West Yorkshire Combined Authority Transport Lead, said: “HS2 and Northern Powerhouse Rail, integrated and with a new Bradford city centre stop, are vital to address the poor transport links between cities in the North and Midlands which have acted as a significant break on our economies.

“In my own region this investment will deliver 50,000 additional jobs as well as an annual £600m boost to the UK economy from better connections between Leeds and Birmingham.

“There is not a binary choice between having a long-term investment programme for the existing rail network and the delivery of new infrastructure. Both are required if we are to have the modern reliable rail network the UK needs.” 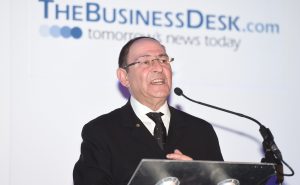 Sir Howard Bernstein, former chief executive of Manchester City Council and member of the Northern Powerhouse Independent Panel Review into HS2, said: “Northern bodies and elected leaders have called for greater devolution of oversight over their rail networks – as part of our bold new view of structures, further discussions will need to take place between civic leaders and central government on democratic structures to ensure accountability.

“The North deserves better and will continue to campaign to ensure we secure a proper share of national resources and meet our ambitions so that we achieve our full economic potential.”

“The benefits of Northern Powerhouse Rail and HS2 together are greater than either scheme alone and cancellation of either East and/or Western leg without a proven and credible alternative could leave us with no way to secure the economic competitiveness we need, which alongside productivity gains, is a pre-requisite of rebalancing the British economy.”

The Northern Powerhouse Independent Review is based on an extensive review of the economic evidence, published alongside economic analysis by Steer Economic Development.

Employers’ organisation the CBI also called for HS2 to go ahead, today.

The CBI regional chairs from the East Midlands, West Midlands, Yorkshire and Humber, London, the North East, and North West have all signed up to the “historic” statement on HS2 which states: “Businesses need HS2 to be built in its entirety, linking the East and West of the country as well as bringing the North and Midlands closer together.”

The groups are urging the Prime Minister to offer their unwavering support to the project, explaining it is the only way to ensure the country benefits fully from a once-in-a-generation opportunity to drive regional economic growth and rebalance the economy.

Dealing with current claims that HS2 could be scaled back or the Eastern Spur could be scrapped they state that “a scaled back version of HS2 will not deliver the improved connectivity across the country that businesses are crying out for”.

CBI Regional Councils are usually focused on their areas specifically and work on key economic issues facing a region, its business environment and the economy. So, today’s joint statement, says the organisation, is a unique intervention and historic.

CBI Chief UK Policy Director, Matthew Fell, said: “The unequivocal message from CBI regional councils spanning all parts of the proposed route is back it, build it, benefit from it.

“HS2 is the key driver for the future economic growth of the Midlands and The North. As well as critical East-West links which have been often neglected. HS2 will help us change that and we cannot put this at risk

“Any watering down or cutting of this critical scheme will threaten the massive benefits of the scheme. It is time to be bold and deliver this scheme in full.”

CBI regional director Richard Blackmore added: “HS2 is more than just a railway line, it’s a key that unlocks future jobs, training and regeneration opportunities that will benefit us all.

“We have all come together to make a joint intervention in this debate, we believe that HS2 is crucial in supporting the UK Government aim of rebalancing the UK economy and boosting productivity in the regions

“It is time for MPs and policymakers to lift their gaze, put the national interest first and back HS2. We cannot have more dither or delay. Britain needs to be bold and I am urging them to back HS2.”

Plans unveiled for £50m centre of excellence for rail research and...

Hundreds of jobs on track to be created as Government department...

Region’s business leaders rebuff attempt to push HS2 onto the...

Mayor launches bid to take over rail franchise after...