The region’s business expectations around output over the next 12 months improved during July as latest data reveals that sentiment was at its highest for three-and-a-half years.

The NatWest West Midlands Business Activity Index – a seasonally adjusted index that measures the month-on-month change in the combined output of the region’s manufacturing and service sectors – rose sharply from 50.4 in June to 61.9 in July.

The latest reading signalled a much stronger increase in business activity at the start of the third quarter, in fact, the second-fastest rate in the survey history (behind February 2014).

Private sector firms in the West Midlands reported a further increase in new business during July, with the rate of growth surging to the second-fastest since the survey started in mid-1996.

necdotal evidence suggested that businesses reopening was a key factor driving higher sales. Growth in new business in the West Midlands was the fastest across the monitored 12 regions.

Business expectations regarding the outlook for output over the next 12 months improved further in July. The Future Business Activity Index reached its highest level for three-and-a-half years, signalling that a greater proportion of firms were more positive about the year-ahead outlook than in June. Optimism was driven by expectations of a further recovery in economic activity as it is hoped that market conditions will return to normality in the coming months. The degree of confidence was the joint-highest across the 12 monitored regions, tied with Yorkshire & Humber. 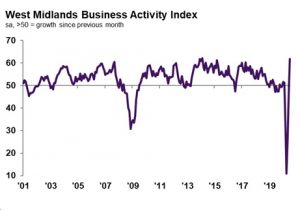 Private sector firms continued to cut workforce numbers at the start of the third quarter, although the rate of decline slowed from June. Nevertheless, the pace of job shedding remained sharp. The drop in staffing numbers was connected to redundancies, according to anecdotal evidence.

July data indicated a largely unchanged level of outstanding business at private sector firms in the West Midlands, with the respective seasonally adjusted index coming in fractionally below the no-change 50.0 mark.

Following a three-month period of decline, input costs faced by private sector firms in the West Midlands rose in July. The rate of inflation was solid overall. Increased expenses were linked to a relative weaker exchange rate and higher transport and wage costs.

Firms in the West Midlands raised their output charges for a second straight month during July. Respondents that reported higher selling prices noted increased costs and improved demand. The rate of inflation remained modest, however.

John Maude, NatWest Midlands & East regional board, said: “The rebound in business activity across the West Midlands’ private sector economy gained momentum in July, according to the latest PMI data, led by resurgent demand as businesses reopened in greater numbers after the COVID-19 lockdown.

“The increase in new business was substantial, hinting at much-improved levels of demand. External demand also reportedly contributed to the overall improvement. The brightening picture was accompanied by improved sentiment, with business confidence reaching the strongest in three-and-a-half years during July.

“While the PMI’s New Business Index showed strong gains in July, the inflows of new work failed to put pressure on operating capacity, as reflected by the level of backlogs broadly unchanged from June. A lack of capacity pressure weighed further on hiring, with employment falling sharply again.”

Cashmere company bounces back from pandemic

Work on Metro route continues with removal of another major structure

Fresh lockdown restrictions imposed across parts of the Midlands