Employment specialist Charlie Frost has a new job of his own after he was chosen as the successor to Nick Green as Squire Patton Boggs’ office managing partner in Birmingham.

The lawyer will step up on January 1 to lead the 150-strong team in a planned transition at a time of uncertainty and opportunity.

The firm has continued to strengthen its rankings in Chambers and Legal 500 and last month retained its title of Professional Services Firm of the Year at TheBusinessDesk.com West Midlands Business Masters. 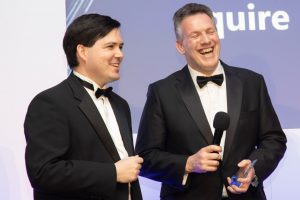 “Nick has done an amazing job for 10 years and most of my job will be to carry on that great work,” said Frost.

“The office is in great shape – it is doing far better than you would expect in the circumstances.

“Our pitch team in Birmingham is very busy and it’s all looking very rosy.”

The impact of Covid-19 has, as with all firms, required a shift to remote working, although some staff have been going in to its Edmund Street offices.

He said: “More than ever, there is the opportunity for working across the offices and we are able to seamlessly work as a wider team as part of a national effort.

While Brexit is helping drive “huge demand” for the business immigration team, Frost’s international ambitions go further than the impact of the UK’s European trade relationships.

He said: “Covid has brought in to real focus the need to have a go-to firm – especially when companies need advice internationally in a range of jurisdictions – and we can co-ordinate that advice.”

His calendar already has an international feel – video calls with Tony Chong, his counterpart in Perth, Tatiana Prokopová, managing partner of the Bratislava office, and the European employment partners’ group slotting in alongside his domestic commitments.

The Birmingham office’s networks and cross-border work already reaches the 20 countries and four continents that Squire Patton Boggs has offices in.

“We want to make sure we see a demonstrable partnership with our other offices. I want the profile of Birmingham to be as good as it can be across the firm and be seen as a key part of the huge success story of Squire Patton Boggs.”

Frost joined the firm, which was then Hammond Suddards, as a trainee solicitor in 1997 and became partner in 2008. He has led the Birmingham labour and employment practice for the last nine years.

Green, who will continue to lead the firm’s real estate practice in Birmingham, gave a glowing reference for his successor.

“Charlie has played a key role in the success of the office over many years and it is his energy, enthusiasm and leadership skills that make him the natural choice to lead the charge as we move into our next chapter, ably supported by our outstanding team in the city,” he said.

“It has been a great honour to serve as managing partner of the Birmingham office and to see the office grow and prosper, supporting clients on a regional, national and international stage.”

Recruitment company set to double in size with relocation