Plans to develop 61 apartments at a canalside site on Scotland Street have been given the green light by Birmingham City Council.

The scheme, which includes the 14,000 sq ft Lockside House office building, is the first in the city by Consortia Developments, a London-based property development and asset management business specialising in new homes.

The developer has now won planning permission to add a roof extension to the building and to develop the adjacent car park, creating a total of 17 1-bed and 44 2-bed homes at the site.

Originally built as a workshop, and part of a series of buildings known as Scotland Works, Lockside House housed a number of manufacturing businesses in the late 1800s. In the early 20th century, a plate and sheet glass merchant occupied the premises.

The brick-built building, sandwiched between Scotland Street and the towpath of the Birmingham and Fazeley Canal, is typical of workshops in Birmingham from the late Victorian era. However, the site was bombed during WWII and underwent post-war alterations as a result.

It was converted to offices in the 1980s.

Associated Architects has designed the £16m (GDV) scheme, which will vary between five to six storeys, in keeping with adjacent residential buildings. Lockside House’s original features, including brickwork, exposed steelwork and internal fireplaces, will all be retained. Windows added 40 years ago will be replaced with full height Crittall counterparts, more in keeping with the original design.

Archie Ward, managing partner at Consortia Developments, said: “Once a workshop, then an office, Lockside House is set to enjoy a third act as new homes.

“Although it is not listed, the building contributes to the character of the area and we fully intend to preserve its best features. We are very much looking forward to restoring this characterful building and improving the wider brownfield site.” 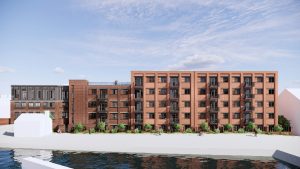 Consortia is funded by a small group of private investors. Focusing on residential development, the business has sites in London, Bristol, Milton Keynes and Darlington.

Olly Clayton, partner at Consortia, said: “Birmingham has been on our hit-list for some time, so we were thrilled to secure this site and to now have planning permission to develop it.

“The site is located on one of the most scenic parts of the city centre canal network, overlooking the Farmer’s Bridge lock flight and canal wharf and next to the Grade II listed Canal Toll Office. The Canal & River Trust has invested in landscaping the area, with plants and fruit trees greening up the towpaths.

“With easy access to the city centre, Jewellery Quarter and Brindleyplace, it will be a very desirable place to live.”

Fifty-eight of the apartments are for private sale, with three allocated for affordable housing.

Corsortia is planning to start on site in May 2021, when the existing tenants vacate the building.

Groundworks currently occupies the entire top floor; Sustainability WM, the only other occupier, has 1,000 sq ft on the second floor.

The development is anticipated to complete in Q2 2023.