Developer Capital & Centric has been appointed to bring forward £75m million plans for a key regeneration site in Stoke-on-Trent which includesnew homes, a hotel and a water taxi.

Stoke-on-Trent City Council has announced it is to work with Capital & Centric to create a new urban quarter, The Goods Yard, next to the city’s main train station.

The plans will see the Swift House site, which is owned by the council, renamed and transformed to provide 180 homes, a 150 bed hotel, 25,000 sq ft of workspaces and 10,000 sq ft of retail and leisure space.

The site is located next to Stoke-on-Trent train station, which will be served in the future by HS2, and on the doorstep of Staffordshire University, the Trent and Mersey Canal and the A500.

The plans include revamping the building’s locally listed, vaulted basement, which historically served as a goods yard and interchange between the railway and the canal.

It will be opened up to the public as a workspace and leisure venue that will be known as Vaults Warehouse. While plans continue to be drawn up, the intention is to attract pop-up operators to the site.

An animated outdoor public space will link the development to the wider area, connecting the train station with the canal, with an ambition to create a water-taxi to Stoke City’s bet365 Stadium. The public will be asked to come up with a name for the new area at a later date. 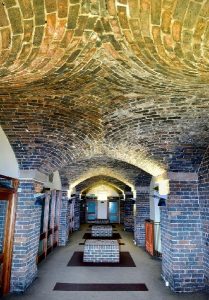 Cllr Abi Brown, leader of Stoke-on-Trent City Council, said: “We’ve seen so many positive and exciting developments in recent years but for me, this is the one that really grabs the headlines and will redefine the future of Stoke-on-Trent. There was a time in the past when we could only have dreamed of attracting an award-winning developer like Capital and Centric to come and work in the city, so I think it speaks volumes for how far we have come, our ambition and the direction we are moving in.

“There is no doubt in the huge potential of this site – one of the most prominent, underdeveloped pieces of land along the HS2 route nationally. It’s location, next to so many key sites and the superb road, rail and canal links make the development an excellent opportunity for a range of occupiers and a true once in a lifetime opportunity for Stoke-on-Trent to have something bold and unique.

“This will be an iconic and important development not just for Stoke-on-Trent but the whole of the Midlands that will make people sit up and take notice of the resurgence that is happening here. A waterside food and drink offer with mooring facilities for passing canal boats would be a Premier League attraction for any city and it’s exactly what we want and what we deserve.”

The council has entered into a pre-construction partnership with Bowmer & Kirkland construction group, which has appointed Capital & Centric as a development partner to work up detailed designs for the development of the site and securing planning consent.

That would pave the way for the scheme to be developed, which could potentially start as early as next summer and would take around two-and-a-half years to complete.

The council first put the site forward as a development opportunity at the MIPIM property and investment conference in 2018 and has been involved in ongoing discussions with development companies since then.

Tim Heatley, co-founder of Capital & Centric, said: “We’re super excited to be undertaking our first project in Stoke-on-Trent. We’ve got the opportunity to create something really special here that can transform this part of the city. This will be a new urban quarter, with design led homes, a hotel, and spaces for local businesses to locate. We’re also looking to open the stunning basement vaults that sit alongside the canal up to the public, with maybe a waterside bar or restaurant.

“High quality, outdoor public space will connect the site to the wider area and draw people in, creating a vibrant new destination. While we’re working up the plans we’re looking for pop ups to use the space so if you’ve got an idea, get in touch.”