Law firm mfg Solicitors has announced the promotions of ten specialists following another year of growth across a variety of departments.

Farming expert Alexandra Phillips is promoted to partner within the firm’s Agriculture and Rural Affairs department. Meanwhile, Andrew Chandler, who deals with a variety of contentious probate cases, also becomes a partner.

Five lawyers have also been promoted to senior associate and associate level.

Maynard Burton, partner and chairman of mfg Solicitors said: “All ten solicitors fully deserve their promotions and they come after a hugely difficult year where they have shone time and time again, supported clients and expanded their reputation as first-class lawyers.

“Alexandra, Andrew, Ben, Rhiannon and Sally have rightly been thought of as rising stars for several years now and will take on further responsibilities as partners. Sharon, Nichola and Lisa each have exceptional track records, whilst Chris and Becky also deserve their next step into more senior roles.”

mfg Solicitors has six main offices across Worcestershire, Shropshire and Birmingham. Its head office is in Kidderminster. 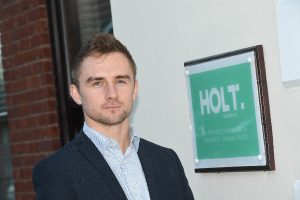 A property professional at a Coventry-based commercial agency has celebrated three years with the company by being promoted.

Chris Hobday joined Holt Commercial in the spring of 2018 as a surveyor and has now been made an associate director at the firm which was established in the same year after a merger of two established companies in the region.

He said: “Following some rewarding years up north, I moved to Holts to experience the market in a major city closer to home and with a well-established firm in the area.

“Holts is hugely respected in the regional market and Coventry is a city which has seen considerable expansion and investment in recent times so it was always going to prove an exciting place to work.

“I work predominantly within the agency department across a wide-ranging commercial instruction list for a variety of corporate and private clients. On a personal level, of course it is fantastic to be rewarded for the hard work. It’s also exciting to be a key part of a company who have experienced considerable recent success since the merger shortly before I joined.”

The past three years has seen Hobday involved in a number of significant transactions including the sale of multiple freehold industrial units and mixed-use investment sales with values over £1m, while also actively pursuing acquisition opportunities for developer and investor clients. This complements the regular involvement with a number of multi-let industrial estates and taking a key role within the City Centre South Redevelopment area.

Peter Holt, a director of Holt Commercial, said: “Chris is very dedicated and, as well as developing a very good market knowledge and being very proactive, he has built an impressive network of contacts inside and outside the industry which has helped secure some good deals for the company and our clients.

“As we continue to come out of lockdown look out for further updates from the company in the coming months.” 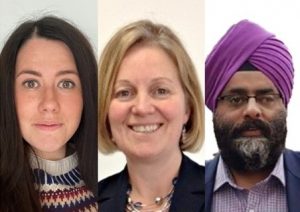 A trainee solicitor at Irwin Mitchell is among three new trustee appointments at Birmingham-based Services For Education, the organisation that employs nearly 250 people in the city delivering professional development and school improvement for teaching and support staff, and teaching music to some 38,000 children a week.

Joanna Cooney, who grew up in the West Midlands, is a trainee solicitor at Irwin Mitchell and due to qualify in September 2021.

Her appointment coincides with a new Chair for the charity and the appointment of another trustee. After obtaining a psychology degree at University of Bristol, Cooney provided HR support to a FTSE 250 company before pursuing a career in law.

Since joining Irwin Mitchell, first as a paralegal, she has worked in its employment team where she has developed a specialism in employment law issues in the education sector.
The charity has also announced that its new chair is Sarah Smith, Director of Education at Birmingham Diocese. She succeeds Martin Chitty, a partner with Gowling WLG, who is retiring as chair of the charity after nine years in office.

In her role at Birmingham Church of England, Smith – who became a trustee in March 2015 -oversees 51 Church of England schools across the Birmingham diocese. She is also involved in setting up a new secondary Free School and is looking for further free school options for the Diocese.

Previously, she was executive headteacher of St John’s CE Primary School in Sparkhill and has also served as Chair of Birmingham Local Authority Primary Forum, a member of Birmingham School Forum, and as one of the founders of Birmingham Education Partnership, supporting schools on their journey of school improvement.

Parmjit Singh has also been appointed as a new trustee. He was previously a trustee of West Midlands-based Angling Unlimited which promotes social inclusion, wellbeing and improving confidence with disadvantaged groups. He has held several senior roles in technology and, as a Social Value Ambassador, supports several NGOs that provides re-cycled technology for education.

Aston Martin CFO to stand down for personal reasons

West Midlands most likely region to invest in salaries

Lawyer retires as next generation steps up