An aristocratic couple who have been kicked out of the £85m family home they are in line to inherit are taking a shot at expanding a liqueur business that reminds them of their wedding day.

The Earl of Yarmouth, William Seymour, is the heir to the Marquess of Hertford and the 6,000-acre Ragley Hall estate in Warwickshire.

He married his wife Kelsey, a former Goldman Sachs director who is eight years his senior, in summer 2018 before his relationship with his family broke down.

They are now living with their two sons, not in the 110-bedroom Ragley Hall, but in a cottage beyond the boundaries of the Alcester country estate.

William said: “My family has an interesting history, in years gone by, and more recently, with characters some good and others less so.

“I want my sons though also to inherit a contemporary story that’s not based on the mores of the past, but which is much more forward looking. I want to pass on the values of tenacity, honesty, and hard work, and reinvigorate the spirit of our family motto ‘by faith and love’.” 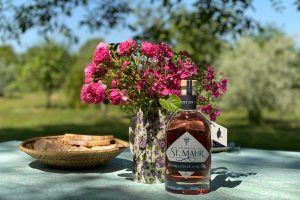 St Maur is created from elderflowers harvested in the Ragley Woodlands and Alcester Park Farm, but it also has its origins in the couple’s 2018 wedding.

William said: “St Maur originates in a drink we produced for our guests on our wedding day three years ago, to celebrate with us with a glass of something uniquely special. We wanted a drink that would capture the spirit of that lovely day, something quintessentially English.

“The brand is all about authenticity. It is an artisanal English product from the Heart of England.”

St Maur is his medieval family name, which had become Seymour by the time Henry VIII took Jane Seymour as his third wife.

William said: “We first brought St Maur to market in May last year, and we had intended it to be a wedding drink, but with the pandemic and couples no longer having weddings, we changed tack to start building our business position in central England through farm shops, delis and independent merchants, which were thriving, as our route to market.”

The business has just moved into new premises at Alcester Park Farm near the Ragley estate. This will allow them to expand with warehousing for production and storage.

Kelsey added: “Moving to the farm is hugely exciting and completely transformative for us as a family and business.”

The business expansion comes at a time of increasing demand for the product which can now be found in retail outlets across the Midlands as well as restaurants and bars, including now in London.

Start-up aiming to bridge gap between gaming and cryptocurrency on...

Fashion firm has designs on growth after landing £250,000 investment

Brum comms agency goes Down Under with new Brisbane office

Round table report: Good growth – what it takes to scale a business...