The highly-anticipated opening of Birmingham’s newest sky restaurant, café and bar has been announced.

Orelle set to open its doors on Friday 14th October, located on the 24th floor of 103 Colmore Row.

The 3,767 sq ft double-height restaurant will be set against a backdrop of 360-degree panoramic views across the city and beyond.

From 12pm – 1am, a French menu will be served by a team led by executive chef Chris Emery, who joins Orelle following positions at The Alice in Oxford and Jason Atherton’s Michelin-starred restaurants, Pollen Street Social in London and The Clocktower in New York.

Dishes include blackberry cured ‘Truite’ for starter; ‘Porcelet’ suckling pig and ‘Citrouille’ tagliatelle for mains, and a venison, grouse and chicken wellington ‘En Croute’ for sharing. 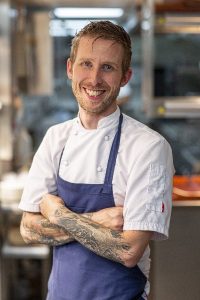 Alongside Emery’s menu is an extensive list of wines, spirits and more than 20 cocktails that have been created by Tiago Bastos – who previously worked at the The Grand Hotel and The Edgbaston Hotel.

Orelle’s interior has been created by architects Doone Silver Kerr, now incorporated into Ryder Architecture. The design pays tribute to the site’s heritage as the former National Westminster House, while drawing influence from the nearby Jewellery Quarter.

On the ground floor, Orelle’s 38-cover café and 28-cover outdoor terrace will be open from 8am – 11pm, serving breakfasts, brunches, lunches and afternoon tea.

In the evening, the space will become a cocktail bar.

Orelle is the first venture in the Midlands for hospitality group, D&D London, joining its portfolio of more than 40 restaurants, bars and a hotel in the UK, Paris and New York.