As part of the council’s EV Trials scheme, businesses will get access to electric vans for two months and also be able to trial private hire vehicles and e-bikes.

The scheme seeks to tackle air pollution to protect the health of everyone in the region by reducing emissions from travel.

Launched at Headingley Stadium, the scheme aims to build on the growing popularity of ultra-low and zero emission vehicles. Since 2017, the number of electric and hybrid vehicles registered in our region has more than doubled.

More than 250 businesses from a range of sectors have already expressed interest in the scheme. 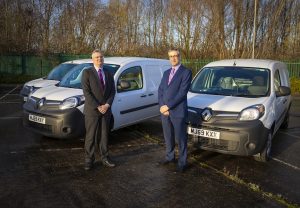 Councillor James Lewis, Executive Member for Resources at Leeds City Council,said: “Everyone has a responsibility to reduce emissions, help tackle air pollution and reduce their carbon footprint. We know that changing to electric vehicles would be a leap in the dark for some so this trial is to support businesses to understand the charging regime without having to make an upfront financial commitment.

“Not only are electric vehicles better for the environment, they’re also cheaper to run and maintain than traditional diesel and petrol vehicles.

“We’d encourage businesses and organisations from across the region to consider taking up a free trial. EVs could help them save on running costs while reducing levels of pollution in Leeds.”

Christopher Plumb, Highways England Air Quality Specialist, said: “We are excited to be supporting this project by Leeds City Council which encourages more businesses to try out electric vehicles.

“This project forms part of a programme of activity by Highways England to improve air quality across our network.”