Next phase for new residential development in Sheffield

New plans for the revival and restoration of the former British Tissues site in Oughtibridge have been submitted to Sheffield City Council.

Sky-House Co, which already has approval for 35 of its Sky House homes – a back-to-back housing concept created by the architects at the Sheffield multi-disciplinary practice CODA Studios – at the former industrial site in the picturesque Don Valley. 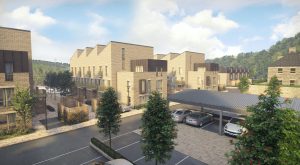 The firm proposes to turn the buildings into a mixed use food hall, community hub and leisure facility alongside facilities for start up businesses, to support the creation of a community at this development and the wider area.

David Cross, co-founder of Sky-House Co, said: “The interest in this site has been enormous and we are already in talks with two operators who are very interested in the food hall development, which would bring a new dining experience to the north of Sheffield and serve what is set to become one of the city’s most ambitious residential developments.

“The food hall will be a fantastic community, family and social space that will be of benefit not only to the people on this site but also for the north of Sheffield as a whole.

“This whole site has enormous potential and if plans to re-establish the Woodhead rail link also prove viable this whole area will have access not just to Sheffield but to Manchester.”