A leading Sheffield industrialist has died following a short illness, leaving a historic legacy for the city.

Peter Birtles, 73, became synonymous with the city’s most famous engineering company, Sheffield Forgemasters, where he spent most of his working life tackling roles ranging from production director through to managing director of the business.

In 2005, he served as non-executive director at the firm, partnering former chief executive, Graham Honeyman, and chairman, Tony Pedder, in a bold management buyout which rescued the company from administration to secure its future as an independently-owned, technology-driven manufacturer.

David Bond, CEO at Sheffield Forgemasters, said: “Our thoughts are very much with Peter’s family at this sad time.

“He was an integral part of the Sheffield story, committing his working life to the engineering and steel industry and he will forever be an important part of this company’s history.”

Birtles was born in Sheffield in 1946, educated at High Storrs Grammar School, the University of Sheffield and Sheffield Hallam University.

He graduated in metallurgy and subsequently trained in general management. 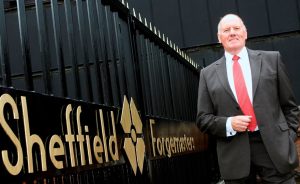 He undertook metallurgical training roles at Osborne Steels in the 1960s, moving into sales management during the 1970s and specialising in exports to the far east, knowledge he would build upon later in his career.

After a series of management and production roles at Osborne Steels, he moved to Firth Rixon, before starting at Sheffield Forgemasters Engineering (Ltd) in 1984, becoming managing director of the business in 1988, taking the company to a £90m turnover.

He led the company’s entry into the world nuclear forgings market and pioneered sales into Japan for Japanese domestic nuclear power generation applications.

His subsequent work as a consultant to Sheffield Forgemasters led to him taking on the role of non executive director in 2005, a role he continued in until his retirement in 2016.

Birtles’ work helped Sheffield become an international brand through exports to India, China, Russia and other destinations, using his breadth of global connections to develop Sheffield Forgemasters’ products and services for diverse markets.

Sheffield Forgemasters has led the gathering since 2003 with Birtles acting as chairman for many years.

In 2017, Birtles worked with Tony Pedder to launch the South Yorkshire Chaplaincy and Listening Service, a charity which provides listening, chaplaincy services and confidential pastoral care, to individuals in and out of the workplace – supporting many of the region’s industries.

“He was a quiet, unassuming man with a passion for good. His belief and enthusiasm was his driving force, not public recognition.

“Yet his personal efforts have helped preserve hundreds of jobs and recreate state of the art engineering in Sheffield.

“As a good friend, he will be sadly missed. He had encyclopaedic knowledge of specific markets and was known the world over by people who understood large scale engineering.”

Peter Birtles was married to Linda, with two sons, Matt and Tim.

New president at the Chamber