The York Central Partnership has welcomed the Government’s confirmation of £77.1m funding to help unlock homes, better paid jobs and community spaces on a major brownfield site in the city.

The Minstry of Housing, Communities and Local government has written to the City of York Council to confirm the arrangements for the funding, which will be awarded to Homes England and Network Rail as the major landowners on the site.

Under the arrangement, City of York Council will be reimbursed for the money it has committed to keep the project moving. 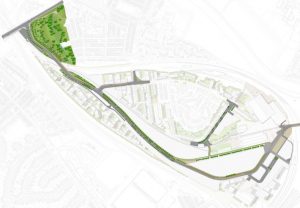 The funding is a major piece in a £155m funding package put together by the council working with fellow York Central Partnership members Homes England, Network Rail and National Railway Museum to fund the infrastructure works to exploit the 45-hectare brownfield site.

The first phase of this work will include an access road bridge and spine road, a pedestrian bridge on Water End and a rail link to the National Railway Museum.

Councillor Keith Aspden, leader of City of York Council, said: “This is fantastic news for York. Our early investment and continued commitment, even during the pandemic, was essential to secure this investment.

“The funding is a vital step to unlocking a £1.16bn boost to our economy, and delivering a new generation of jobs and hundreds of affordable homes, when York needs it most.

“The York Central Partnership is delivering where decades of proposals have failed.

“Our shared vision for an ambitious development which delivers cleaner, greener growth and a fairer economy in York underpins the entire project, and we will keep playing our part to make York Central deliver for the whole city.

“This is the result of a lot of hard work by the York Central Partnership, and further demonstration of our commitment to an ambitious scheme which will give York the jobs and homes it needs.

“The outline planning application for York Central includes proposals to build up to 2,500 homes, including affordable homes, and a commercial quarter creating up to 88,000 square metres of high quality office space.”