Second UK base of operations for established European airline

The announcement has led tothe airport predicting massive expansion, with the airline believe the move will help meet an “underserved group”. The airline has been working with the airport for over a decade but following today’s announcement it will now serve additional locations including Alicante, Malaga, Larnaca, Faro, Lublin, Kosice, and Suceava.

Owain Jones, managing director of Wizz Air UK, said, “Throughout the recent challenges, we have seen a real resilience in the UK and at Doncaster Sheffield Airport in particular. This breakthrough plays an important role in our business planning and aspiration to make air travel affordable for everyone. 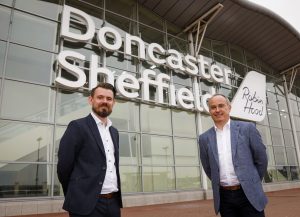 “We’ve been continuously driving down our costs to become the most efficient airline in Europe. Our fleet of latest-generation Airbus A320 and A321 aircraft make us the greenest airline in Europe and one Airbus A320 will take up residence at DSA from November. We currently see an underserved gap and DSA will play a key role in our plans for future growth.”

Chris Harcombe, Director of Aviation Development at Doncaster Sheffield Airport, said, “We are delighted to bring more ultra-low fares to DSA, to these popular destinations loved by our customers and served by an airline who pride themselves on providing affordable travel, with an excellent reputation. It is a shared intention to bring further aircraft as part of this agreement within a matter of months.

“There is no doubt that the aviation sector faces its greatest challenge in modern day history at this time. It is essential that the UK Government acknowledges and supports airlines and airports that bring much needed investment into the UK economy. Doncaster Sheffield Airport contributes over £60 million to the Sheffield City Region and offers job security for thousands of people.”

Robert Hough, Chairman of Doncaster Sheffield Airport, said, “Our partnership with Wizz Air is incredibly special to our business. Both Wizz Air and Doncaster Sheffield Airport began their journeys’ in the early 2000s as challenger brands with a shared desire to provide opportunity for the people of our respective markets through obtainable travel.

“Fast forward 15 years and Wizz Air is one of Europe’s most successful and well-established airlines and Doncaster Sheffield Airport as one of the UKs fastest growing airports – it’s a true partnership that has gone from strength to strength.”