In a first for the company, it will supply energy giant GE’s Power Conversion Business with central parts for Rotating Stabilisers, large turbine-like devices which work to stabilise electricity fluctuations on the electrical grid.

Sheffield Forgemasters will initially deliver the main rotator shaft and hub for a Rotating Stabiliser located in Moray, Scotland which has been developed by Statkraft, a leading provider of renewable energy.

Kunal Popat, senior sales manager at Sheffield Forgemasters, said: “This is an exciting project to be involved in, we are delighted to be working with GE Power Conversion on their first Rotating Stabiliser reference in the UK Energy sector, an identified growth sector for Sheffield Forgemasters. 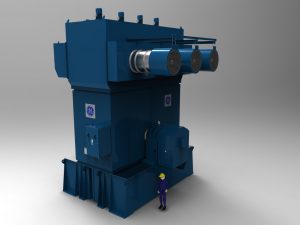 “The challenge of forging these large components and then conducting a delicate heat-shrink fit to bond the hub onto the Rotating Stabiliser’s main shaft, is significant.

“Our Research, Design and Technology team has had considerable input into the design of both components and the subsequent route to manufacture.

“We are initially supplying the components to a site in Scotland but hope to further the work we are doing with Rotating Stabilisers as part of a broader programme of renewables projects, which includes expansion of our subsea work for offshore wind power.”

As more clean renewable energy sources are added to the grid, the stability that was provided by fossil fuel plants is no longer present, and therefore new sources of stability need to be provided.

The devices can provide up to 65MVA and have 450MWs of stored energy and Sheffield Forgemasters will deliver its first GE Power Conversion components in early 2021.

GE’s Power Conversion business is part of GE Power, which applies the science and systems of power conversion to help drive the electric transformation of the world’s energy infrastructure.

Manufacturer confident of emerging stronger and more competitive from...