Proposals have been submitted for a major employment site in Doncaster that could create around 4,000 new jobs if it wins approval.

The 195-acre site next to Junction 4 of the M18 motorway is owned by Blue Anchor and has been branded West Moor Park East.

It will be an extension of the existing West Moor Park commercial development that currently accommodates Ikea, Next, Fellowes Manufacturing, Anglo Beef Processors and other leading businesses.

The masterplan – designed by architects Bowman Riley – includes flexibility for a range of employment units and will also feature extensive landscaping and planting, trails for exercise and outside seating areas.

It is located close to Edenthorpe and Armthorpe and has attracted significant commercial interest already.

Development of the site would also complement public investment in the A630 West Moor Link dualling scheme, with works on this infrastructure well underway.

This council-led scheme has been supported by the Sheffield City Region Growth Funding and is intended to “enable investment in new developments that create new jobs and homes.” 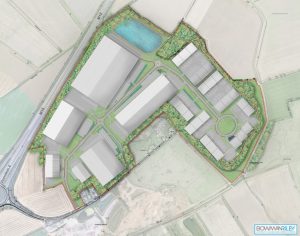 “Over recent months there has been a big take up of other commercial space that has resulted in an undersupply of space in the Doncaster area.

“We strongly believe these plans will help Doncaster, and the wider City Region, to ‘build back better’ and create a more sustainable, greener, resilient and prosperous borough that is the aim of all politicians.

“There is very strong interest from major developers and occupiers because of the tremendous location and transport links that West Moor Park East offers, and the fact the proposals can be delivered quickly, subject to planning permission from the council.

“It’s an opportunity we feel should be grasped to create a sustainable new business park and extend the already successful West Moor Park.

“We are calling on Doncaster Council to support these proposals and the thousands of jobs that will be attracted, in these challenging times.”