The work has transformed the vessel into a floating hub to transport the new world-wide Extreme E electric rally car racing series around the globe.

Hessle-based WYM Group has spent the past 18 months completely refitting the St Helena – which provided the only transportation for both people and cargo to and from the island in a previous life, before an airport was built in 2016.

She is now set to become the logistics hub for the new Extreme E global off-road racing series, which starts next year and includes a team run by Formula One champion Lewis Hamilton.

Led by Austen Brunton, WYM Group’s technical project manager, a team of 30 are closing in on completing the project, having finished work which has included refurbishing the interior, renewing steelworks, hydro blasting and a full repaint of the hull and substructure.

Mechanically, all systems have been overhauled with the engines being completely stripped and all components renewed or replaced, and propellers refurbished to reduce friction and improve efficiency.

The ship will also run on low sulphur marine diesel. 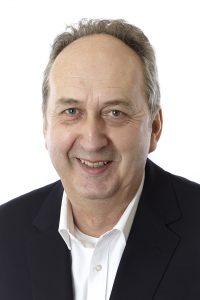 A new black and green livery, including the Extreme E logo, was seen for the first time recently as St Helena sailed along the River Mersey to Bidston dock, where the final interiors are now being completed.

Brunton said: “Everything you see on St Helena has been overhauled.

“As a 30-year old ship she needed quite a lot of work to get her ready for her new role with Extreme E and some adaptions to make her suitable for both passenger and cargo use,”

“Seeing her re-enter the water is a very proud moment for myself and all my team. We have spent 18 months working on her to get her into this condition and it has been great to see her finally back on the water, where she belongs.”

The Extreme E series, which is scheduled to start in 2021, will see teams of all-electric vehicles race in remote parts of the world.

St Helena will transport the championship’s freight and infrastructure, including vehicles, to the nearest port in each of its four race locations in Saudi Arabia, Senegal Greenland, and Brazil.

The locations have been chosen as they have each already been damaged or affected by climate issues, raising awareness of climate change and the need to help protect the planet.

Managing director Allan Wilson said: “The St Helena was chosen by Extreme E as its freight and logistics hub due to her versatility and ability to carry a mixture of cargo, which will include the championship’s cars, as well as passengers in 62 cabins on board,” he said.

“It was really tremendous to see the new livery on display when she was back in the water to move shipyards recently and her transformation has been a credit to our team.

“There are many more challenging and exciting days ahead as we manage what will be a unique project in some ways, but one which also is essentially our daily bread and butter as a ship management specialist.”

Regeneration funding bid of more than £25m to be submitted