A growing haulage company has launched a base in Yorkshire after acquiring a large site at Wilberfoss near York and making a significant investment in its fleet as part of the expansion.

Slam Transport has acquired the 6.55 acre site, on Hull Road, for an undisclosed sum from commercial trailer manufacturer Montracon, which is currently investing in its existing manufacturing centres in both Market Weighton and Doncaster.

To coincide with the site acquisition, Slam Transport has also ordered 100 new trailers from Montracon.

Slam Transport was founded in Coventry in 2015 with a fleet of six trucks and this has rapidly expanded after the company won a number of large-scale distribution and transportation tenders, as well as a contract with one of the UK’s largest internet retailers. 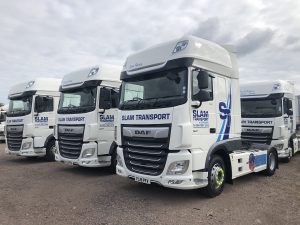 It now operates more than 450 tractor units and approximately 800 trailers throughout Europe, with strategically located bases in the Midlands, London and Scotland, as well as a newly acquired site in Darlington.

There are also two residential dwellings on the site with development potential.

Paul Mack, director from Gent Visick, said: “Industrial sites such as this rarely come available in and around the York area.

“The property is perfectly placed to service both the North and East Yorkshire markets and we are delighted to have secured a very positive result for our client.”

Harinder Kohli, director from Slam Transport, said: “In recent years we have expanded our fleet and now operate throughout the UK and beyond.

“This site has a well-equipped building and a very spacious yard, which can comfortably accommodate plenty of vehicles.

“It’s also ideally located between the port city of Hull and the A1, and within easy reach of the A19 and M62, which made it the ideal location for our Yorkshire base.

“Crucially, this site, as well as our new Darlington base, now gives us a strong foothold in the haulage market in the North of England and comes at an exciting time as we prepare to further expand our fleet with 100 new trailers from Montracon.”

£2.2m contract awarded to transform ‘blot on the...

Building specialist hired for next stage of £1.2m arena revamp