The business says it has chosen Leeds as its base in the North of England because of its good transport links and skilled labour pool.

It already has offices in London, Reading and Glasgow, with Leeds being the next step in its national expansion plan.

The multi-million-pound nationwide enterprise was formed in 1997 by founder Lee Marley who was just 24-years-old at the time.

His business is now a major integrated brickwork, scaffolding and stone subcontractor, and it turned over £47.1m in 2019.

The firm has appointed Mike Hampton as commercial director to head its new regional office in Thorpe Park, Leeds.

Hampton is a seasoned industry executive who brings 20 years of masonry experience in the north and midlands to the business.

“There is huge potential in the north as masonry packages grow bigger and bigger and it shows great confidence in the region that LMB wants to become part of the Northern Power House story.”

LMB director, Dan Clarkson, said: “Mike is a great addition to our team. Many of our clients have been asking us to work in the region for some time but we have been waiting to recruit individuals that share our drive, commitment to quality and customer focus.” 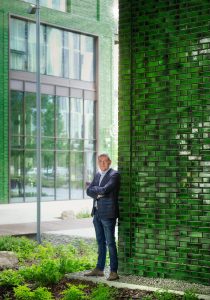 LMB managing director, Lee Marley, added: “We have worked all over the country on major projects but it has always been an ambition of mine to have a permanent base in the region to create a bridge between our work in Scotland and the South and offer a comprehensive national masonry solution to our customers.”

The Leeds-based team will be focusing on large-scale schemes that have become the company’s hallmark in southern England and Scotland.

Future business plans include working with local colleges and universities in the North to further develop LMB’s apprenticeship and graduate programmes.