McCormick has stepped into the post following the resignation of Greg Clarke, after Clarke became embroiled in a controversy over “unacceptable” language he used when referring to black players.

Clarke said he was “deeply saddened” for the offence he caused by using the term “coloured footballers”.

The comments were made while he was talking about the racist abuse of players by trolls on social media to the Department for Digital, Culture, Media and Sport (DCMS) select committee.

He faced further criticism when referring to gay players making a “life choice” and a coach telling him young female players did not like having the ball hit hard at them.

And Clarke also commented there were “a lot more South Asians than there are Afro-Caribbeans” in the FA’s IT department because “they have different career interests”.

A statement from the FA explained: “We can confirm Greg Clarke has stepped down from the role as FA chairman.

“Peter McCormick will step into the role as interim FA chairman with immediate effect and the FA Board will begin the process of identifying and appointing a new chair in due course.

“We would also like to reaffirm that as an organisation, we are absolutely committed to doing everything we can to promote diversity, address inequality, and tackle all forms of discrimination in the game.”

McCormick heads his firm’s Sports and Media/Entertainment practice and is an internationally recognised expert in these areas of work.

He said: “Despite the unfortunate circumstance which have led to my election, it is a great honour to have been chosen to lead the FA and an even greater privilege to become the first person to chair both the Premier League and the FA.” 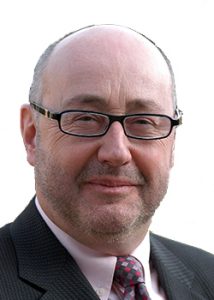 In August 2015, he was elected by the 20 clubs of the League to be a director of the Football Association (FA), a member of the FA Council and chairman of the Professional Game Board of the FA.

Prior to these appointments, he was chairman of the Premier League 2014/15.

In March 2016, he was elected by the Premier League and the Professional Game Board of the FA to the Football Regulatory Authority (FRA), which performs the regulatory, disciplinary and Rule-making functions of the FA.

He is also an FA Ambassador, representing England and the FA at international matches abroad and away from Wembley.

In May 2016, he was appointed chairman of the FA International Committee and a member of the FA Group Remuneration Committee, the FA Committees Appointment Panel and the FA Protocol Committee.

In addition, he was made chairman of the FA Premier League Medical Care Scheme Ltd, a company providing private health care to 95% of professionals in football in this country.