Developer Rushbond has reached practical completion on its flagship office building, The Majestic.

The 66,000 sq ft Grade A space in City Square, Leeds, has been one of the city region’s most hotly-anticipated developments, and is set to be home to Channel 4’s national headquarters from next year.

It has been the subject of a comprehensive redevelopment, with Rushbond appointing Sir Robert McAlpine as main contractor.

The works saw the full restoration of the exterior, and the creation of a new atrium and Palm Court space. 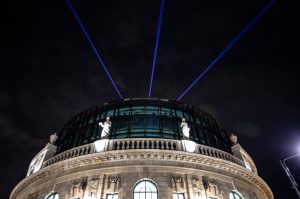 Jonathan Maud, chairman and managing director at Rushbond, said: “This is a monumental time for Rushbond, the project team, and all the stakeholders who have contributed to making this project happen – we’re delighted to have reached this important milestone in the history of the building, of City Square, and of Leeds.

“The fundamental objective has been to breathe new life into the Majestic, reinventing the building so it secures a sustainable future.

“From the start, we have been focused on delivering a restoration that was worthy of the Majestic’s history, and to protect and preserve key elements that make the building so special.

“This is a key moment for us and the team, who collectively have brought forward one of the UK’s most connected, digitally capable, and future-focused office buildings.

“It’s reassuring that we are completing this significant development in the knowledge that we are able to welcome Channel 4 alongside Knights Solicitors to their new home here in Leeds and in the Majestic, which can offer their teams a truly vibrant, amenity-led working environment.

“We have specifically engineered the building so it feels like a vertical creative campus; a space in which likeminded businesses can come together and collaborate.

“The remaining space in the building, including our ground and spectacular lower ground floor – which we’ll be revealing more details about in due course – is ready and waiting for more businesses to take advantage of this fantastic collective opportunity.”

Councillor Judith Blake, leader of Leeds City Council, said: “It’s hugely encouraging that plans to bring this iconic and much loved building back into use are making such progress and to see the development reaching such an important milestone.

“The transformation of this prominent site will give businesses the chance to occupy a prime location in Leeds and make a real statement of intent about our city’s aspirations for the future.

“We’re also very excited to welcome Channel 4 to Leeds and for the opportunities that will bring to our city and its talented creative sector.”

Completion comes as another letting at the building was recently announced, with national law firm Knights confirming it would be taking more than 20,000 sq ft of space – making it one of Leeds’ largest transactions in 2020 so far. 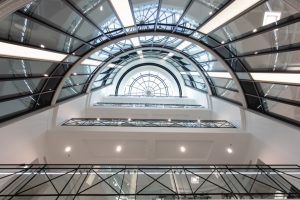 The practice, which has 13 locations across the UK, will take two floors of the Majestic, with Channel 4 taking three – leaving only two floors remaining.

The Majestic was constructed in 1921 as a cinema, before adopting new leases of life as a bingo hall and then Majestyk nightclub.

Roger Marsh, chairman of the Leeds Enterprise Partnership (LEP), said: “The completion of the Majestic is a huge step forward for the city’s business economy.

“We were proud to have played a pivotal role in Channel 4’s move to Leeds, and its relocation to the Majestic solidifies the significance and the ambition of the scheme.

“We look forward to seeing the building bustling with future-focused, talented individuals and businesses in due course.”

The Majestic was designed by DLA Architects and constructed by Sir Robert McAlpine. JLL and Knight Frank are joint leasing agents on the scheme.

Fitness firm presses ahead with expansion into third base