Home / Yorkshire / Property / “From the bad cometh forth good”

“From the bad cometh forth good”

Kevin McCabe is the chairman of Scarborough International properties the firm which is behind the Thorpe Park development in Leeds, the Sheffield Digital Campus and recently revealed a five-year masterplan for the Sheffield Olympic Legacy Park.

TheBusinessDesk.com caught up with McCabe following the reveal of the new masterplan to discuss the new development, what he hopes it will bring to the east end of the city and international investment post-Brexit.

The conversation starts on a reflective note as we discuss whether healthcare and life sciences will be experiencing their time in the spotlight following a year in which a global pandemic has brought the NHS and the businesses in the medical sector to the fore like never before.

“As we talk it’s the old expression, you from bad cometh forth good. This era of the coronavirus which has now gone on for over a year probably helps us focus on why such things as research, health and wellbeing and things that keep people alive longer and fitter is important”.

He adds that this period actually allows people to recognise what Sheffield as a city is already doing in that area, as he highlights a clip that played during a presentation about the forthcoming National Centre for Child Health Technology (CCHT), which showed how the work it does was enabling children who had sight difficulties to see for the first time.

However, he adds that there is more to do and he wants the CCHT and Sheffield Hallam’s Advanced Wellbeing Research Centre to be the magnetic core of what the Olympic Legacy park will be.

“I think some of the growth may well come via the Government’s pledge to ensure that many divisions move from London to the North of England and we must ensure Sheffield is high on that list. Maybe the feature for that will be associate to health, wellbeing and fitness.”

It’s clear he sees a real opportunity to create a new hub of modern industry in an area he describes as having been in his youth synonymous with “industry, smoke and heavy physical work”.

“Our future phases of the park need to combine sport, cycleways, running tracks and the simple things that can help people keep fit, alongside buildings which incorporate gyms, as well as a medical centres. And all these things come into better focus now [as we look beyond Covid-19].”

So, will the Olympic Legacy Park only be targeted at those sectors of health, wellbeing and life sciences, no. “Yes these sectors are at the core of this business park but as it progresses and with the excitement this brings we may find more ‘normal users’ like the SMEs, professional services, engineering firms etc that want to move to the park because they want to be part of it and access the green space.” 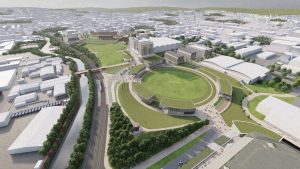 This idea of green space appears to be crucial to Scarborough’s vision for the Olympic Legacy Park with some of its first phase of development set to be around what it calls the “Oval” which will include a cricket pitch in the centre. McCabe adds this will be it’s USP: “The park will have a lot of green space and I’m not sure Sheffield has a major green space mixed use business park – if it does I’ve not seen it.”

During his part of the announcement about the future of the park McCabe touched that the site which benefits from access to the city centre and the M1 by road, tram and canal could in future be linked to Scarborough’s successful Digital Campus – with work starting on the latest building there, Endeavor.

He also however teased the idea that on the other side of the canal to the park could be a site for delivering future homes. So although not currently in plans, McCabe is clearly looking beyond just the current five-year masterplan, but would this be PRS – which appears to be all the rage in city centres or more traditional housing.

“Obviously we’re not, but if we were about to start delivering that now, I’d say it’s conventional homes in terms of houses with space around, garden areas and public green spaces. Perhaps alongside this some apartments, not 50 storey towers but smaller apartment blocks that have ground floor retail facilities, restaurants, coffee shops and the like as I can see that would be needed.”

In Manchester Scarborough’s successful Middlewood Locks development includes some PRS but he says at the moment he couldn’t envisage a PRS operator wanting to be in the area as it is, however “when we finish the Sheffield Legacy Park of today that will have a major impact in actually making [developers] brave across the water in what you produce, so don’t discount it but I wouldn’t be planning to build it today.”

As we look to the future of the site, the conversation turns to international investments, an area which Scarborough has been very successful in leveraging over recent years. Does McCabe see opportunities for that at the Olympic Legacy Park?

“I’ve got a call with one of our partners from the Far East in Singapore coming up to discuss opportunities to partner on the Park. Now this isn’t just a partner in property development they are also partners that are looking to put up buildings that are commercially viable but that are for research and focused on wellbeing.”

He adds that removing the pandemic from the equation he believes that the “fixing of Brexit” means that the country has the ingredients for an international audience to see the UK as the place to invest.

“The international investor looks at it and thinks actually the UK has rediscovered itself” he adds. And although he highlights he voted remain in the referendum he’s clear “we get on with life, it’s no good finding excuses, we’ve left, so now let us reshape.”

McCabe adds that it’s clear to him that there is international capital to be invested and the question is where it can be invested. “I think UK is ended up because of Brexit, in a position where so many investors from around the globe, will want to invest in the UK, if there is the right 21st century product, or business, ready for them to invest in.”