Plans to deliver a new Acquired Brain Injury hospital at the Chocolate Works, York, have been submitted to City of York Council.

Project partners, HBD and The Disabilities Trust (TDT), submitted the plans following a consultation on the proposed development at land south of The Residence.

The scheme, which includes 36 beds across four wards and four assessment flats for service users gaining more independence, will safeguard around 145 jobs in York and secure the future of The Disabilities Trust in the city.

After more than 20 years of operating from York House at The Retreat on Heslington Road, the facility is closing, requiring The Disabilities Trust to move its operations. 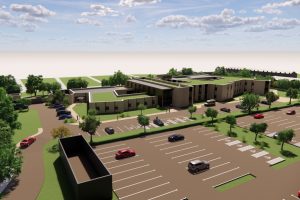 In partnership with HBD, The Disabilities Trust has identified land south of The Residence to deliver a purpose-built facility.

The Disabilities Trust is a charity which works to improve the lives of people with disabilities. It provides services across the UK for people with an acquired brain injury, and separately those with autism and learning or physical disabilities, supporting their independence.

Its York facility specialises specifically in rehabilitating adults with an acquired brain injury.

The proposed scheme would create three private and internal courtyards for service users, as well as an additional therapeutic garden.

Bill Chidgey, director of corporate services at The Disabilities Trust said: “Thank you to everyone who has taken the time to provide their feedback on our plans, we have been greatly encouraged by the responses we’ve received and for the level of support in the local community.

“We are also grateful for the constructive feedback which has allowed us to continue to develop our plans and bring forward a scheme which reflects the needs of the community.

“We are proud to be part of York’s heritage of mental health provision and we are delighted to be bringing forward an application which will allow us to continue our presence in the city after more than 20 years of service.”

Tom Wheldon, director and head of region at HBD, said: “We are pleased to be partnering with The Disabilities Trust to bring forward a scheme that will enhance their capabilities in York and retain this important service.

“The response and feedback from the local community has been very positive – this is a purpose-built healthcare facility that fully considers the priorities of local residents, and which will bring enormous benefit to so many people.”

Joanna Gabrilatsou, director at JLL, added: “This planning application provides an important development which reflects the historical legacy of York as a city which has specialised in mental health care and research for over 200 years and sitting in the grounds of the former Terry’s chocolate factory.

“Bringing both legacies together, we have worked to ensure the design is sensitive and fit for purpose, protecting specialist jobs and recognising the social contribution of this service in the city on a long-standing vacant brownfield site.”