Mayor Tracy Brabin has begun work on developing a Fair Work Charter for West Yorkshire which she believes can “change the lives of millions of people across the region”.

Brabin, who was elected in May, campaigned on a series of pledges including the creation of a fair work charter and on a “fair and just recovery”.

“We have a fundamental productivity challenge,” she said. “There is a clear correlation between low pay, a lack of workforce diversity, and lower innovation and productivity.

“We also have to consider the times we’re living in and the unequal economic impact of the pandemic. 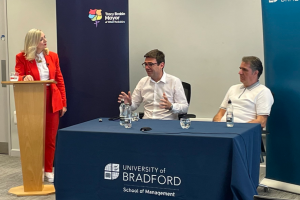 Brabin acknowledged taking inspiration from work done by fellow Northern Labour mayors Andy Burnham and Steve Rotheram, who worked together on their own charters in their first terms of office.

The former Batley and Spen MP convened an event in Bradford that brought together business representatives and policymakers for a discussion before officially launching her plans, flanked by the Greater Manchester and Liverpool City Region Mayors.

She said: “It’s not just about the individual or the job, it’s about the whole region. It’s about our friends and our neighbours, which is why I’m so glad that our two Mayors from Liverpool and Manchester are with us.

“We cannot do this in silos. By standing together, we can change the lives of millions of people across the region.”

Burnham added: “This is about the North levelling up itself. We are doing this together as three mayors – and we’d obviously want to work with Dan [Jarvis, Sheffield City Region Mayor] and Jamie [Driscoll, North of Tyne Mayor] as well.

“We are using what power we have to make a change and level up our communities without always asking for someone else to come and do it for us.”

The West Yorkshire Fair Work Charter has had £600,000 earmarked over three years to support it and will be developed in the coming months to produce criteria for membership.

Greater Manchester’s Good Employment Charter currently has 150 supporters, which are companies that have committed to improving practice. But there are only 29 members, companies that “have put their commitment to good employment into action”, around half of which are from the private sector.

Brabin declined to say how many organisation sign-ups would constitute success for her West Yorkshire version.

“I don’t know what success looks like at the moment,” she said. “But what I do know is we’ve got to do something about it.”

Second senior resignation in a week at tourism agency