Yeadon Town Hall has been returned to its former glory after a two-year restoration project.

Originally built in 1889, the property, which had fallen into disrepair, has been returned as the cultural centre piece of the town by a Community Interest Company (CIC). 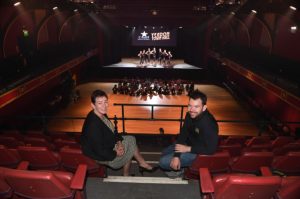 Jamie Hudson, managing director of Yeadon Town Hall CIC, said: “It’s been a long journey, but an incredibly worthwhile one to see this beautiful building at its best.

“We have an exciting programme of events and shows in the coming months, and are proud to drive the creative cultural and tourism appeal of Yeadon.

“This building is also the valuable heart of our community, as an accessible space for local groups to use.”

Highlights include removing its 1950s ceiling in the redesigned bar area to reveal its original double-height Victorian ceilings and stained-glass windows hidden for half a century.

Councillor Mary Harland, executive member for communities at Leeds City Council, said: “The virus has taught us how much we rely on our local communities.

“Yeadon Town Hall was the centre of the town for over 140 years, and there’s a renewed appetite for the venue. 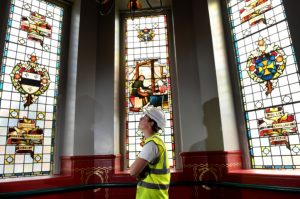 “As a hub, it’s brought the community closer during COVID-19 with its successful community markets, café and pop-up bar. It’s a fantastic asset, and promises to be a vital contribution to the local economy.”

A £100,000 loan from the social investor, Key Fund, in 2018 kick-started the town hall’s internal repairs, and the project has also been supported by the Graham & Diane Smith Charitable Trust.

Leeds City Council backed the transformation with over £750,000 to repair the exterior of the building, including its roof and clocktower.

The CIC also received an emergency grant from the Arts Council during COVID-19.

Hudson said: “The pandemic has been detrimental to the arts and events industry. But the local community has really risen to the challenge.

“The community asset transfer has been a huge success. We’re grateful to all the individuals, volunteers and businesses who have supported us, alongside Leeds City Council for their ongoing support to deliver the essential external repairs of the building. 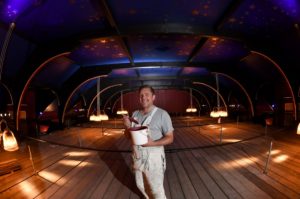 “There is an amazing team of volunteers who help with its running. We have exciting plans for the future of our community and arts hub.”

Vivo has provided an artistic and financial platform for the YSO, producing the Harewood House Picnic Proms this September, where the orchestra will debut.

Yeadon Town Hall will be the official home of the new orchestra, which aims to be the musical and cultural voice for Yorkshire and the north of England.

Lease deal wrapped up with packaging supply and repair business

Heating business prepares for green growth with £16m investment in...