A welded steel mesh products manufacturer has managed a strong financial performance despite COVID-19 disruption, which saw production halted for four weeks during the first lockdown,

Siddall and Hilton Products, based in Brighouse, saw its turnover drop slightly for the year ending 31 March 2021.

The company estimates the impact of the pandemic accounted for around £2.5m in lost revenue.

But it adds continued investment in equipment and process improvements through the pandemic helped it consolidate and build upon production efficiency gains and process scrap reductions achieved in the prior year, resulting in an uplift in pre-tax profits which rose 64.7% from £1.4m to £2.3m.

2020/21 was a transformational year for the business as it marked its largest investment in more than 12 years with the addition of a fifth specialist welding machine at its Brighouse site. 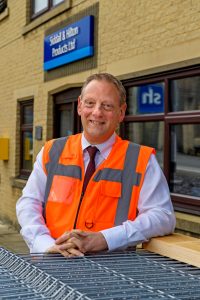 With a value of £2m, the new EVG LGR-102 machine runs over 40% faster than the existing machines and produces up to 70% less scrap.

Over the last 12 months, the 126-year-old company, which is the UK’s largest manufacturer of industrial welded steel mesh for high-security fencing, general fencing and industrial mesh panels, has also grown its workforce.

Its team has increased by almost 25% to 59 people, including a recruitment of nine new trainee mesh operators and two apprentices since January, with a further three currently being sought.

“Last year was another busy time for us, which, despite the challenges of the pandemic, saw the business continue to put in a sound financial performance as we further improved operating efficiencies.

“As one of the largest employers in Brighouse, we have also worked hard to ensure our loyal workforce shares in our success by bolstering employee engagement, driving recruitment and implementing new training initiatives.

“We are tremendously proud of the major investment we have made into a fifth state-of-the-art welding machine which will again increase productivity and is a key step as we move towards our ambitious target of becoming a world class mesh manufacturer.

“As one of the area’s longest-established manufacturers,  it is a real privilege to be at the helm during this exciting time, as we drive the business forward in pursuit of our goals.”

Expanding manufacturer on the hunt for more recruits

First half resilience for manufacturer despite inflation

First base outside Yorkshire opens up fresh opportunities for door...