The East Coast Cluster (ECC) – a collaboration between companies from across the Humber and Teesside – has been named as one of the UK’s first carbon capture, usage and storage clusters.

It follows a bid to the Department for Business, Energy & Industrial Strategy (BEIS).

The ECC was named as a “Track-1” cluster in a written statement from Energy Minister Greg Hands, putting it on course for deployment by the mid-2020s.

The successful bid, led on behalf of the ECC by the Northern Endurance Partnership, is a major step towards achieving the UK government’s ambition to establish the first ‘net zero’ carbon industrial cluster in the UK by 2040.

It also represents a boost for the industrial heartlands of the Humber and Teesside.

The East Coast Cluster will support low-carbon industry and power projects across the region, including those in Zero Carbon Humber and Net Zero Teesside, two of the country’s leading industrial decarbonisation proposals.

Once operational, the cluster has the potential to transport and securely store nearly 50% of all UK industrial cluster CO2 emissions – up to 27 million tonnes of CO2 emissions a year by 2030.

These skilled jobs in new industries, including industrial carbon capture, low-carbon hydrogen production, negative emissions power, and power with carbon capture, are intended to play an important part in levelling up in the UK.

Andy Lane, MD of Northern Endurance Partnership, said: “Today is a significant milestone on our country’s journey to net zero emissions by 2050.

“We are delighted that the East Coast Cluster has been selected and we will look forward to delivering our project, removing up to 50% of the UK’s industrial cluster CO2 emissions, creating tens of thousands of jobs and establishing the UK as a leader in the energy transition.” 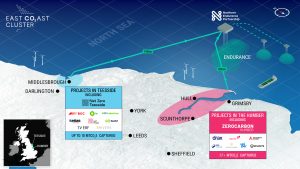 Grete Tveit, senior vice president for Low Carbon Solutions at Equinor, which is a partner of Zero Carbon Humber, Net Zero Teesside and Northern Endurance Partnership, said: “As we mark and celebrate this major step, we look forward to continuing working closely with our partners, local communities, businesses, industry, and academia to deliver this ambitious and world-leading project that will play a major role in levelling up across the country.”

Cordi O’Hara, president of National Grid Ventures, said: “We are incredibly proud to be part of a project that is going to have such a positive impact on the people of the Humber and Teesside.

“The East Coast Cluster will help to revitalise one of the UK’s most important industrial heartlands, creating tens of thousands of jobs for decades to come.

“It will also build a solid foundation to establish the Humber and Teesside, as well as the UK, as a globally-competitive climate-friendly hub for industry and innovation.”

“Teesside and the Humber were once the industrial heart of the UK. Today’s announcement paves the way for them to become the green heart of the country’s energy transition, shepherding in the next generation of industry and ways of working.”

Will Gardiner, CEO of Drax Group, said: “Today’s Government announcement is welcome news, and a crucial next step on the UK’s decarbonisation journey.

“BECCS at Drax will protect and create tens of thousands of jobs, whilst showcasing the UK’s global leadership in a vital negative emissions technology.

“The first BECCS unit at Drax could be operational in 2027, delivering the world’s largest carbon capture project, permanently removing millions of tonnes of CO2 from the atmosphere, playing a vital role in the fight against the climate crisis.”