A new restaurant has opened overlooking Bridlington harbour, after a £250,000 investment that includes a full building refurbishment and jobs for 30 full and part-time staff.

Salt on the Harbour is now offering an a la carte evening menu as part of an offering that also includes full day time and evening seafood-oriented restaurant and bar meals.

The restaurant features harbour and seafront views over two floors next to the South Quay. Local entrepreneur and restaurateur, Michael Harrison, is backing local fishermen and food producers. 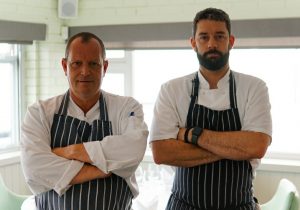 He said: “We buy and source all our crab, lobster, and seafood right here from approved dealers in Bridlington harbour – you can see it landed right outside.

“We are totally committed to providing the very best quality, locally landed seafood.

“If it’s not produced or grown right here in Yorkshire we look as close to home as possible – our oysters are Northumbrian.

“The fishermen are pleased we are backing it, too – especially considering the difficulties the fishing industry has faced with Brexit-related exports and also creating new markets for shellfish in the UK’s hospitality sector.” 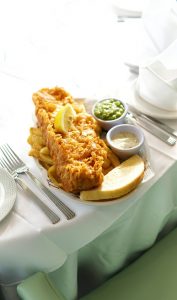 Robson said: “Salt on the Harbour is putting lobster and crab on the restaurant map right here in Bridlington; you don’t see lobster that much on menus, but we’ve got the largest shellfish port in Europe here, so it seems ridiculous that you could rarely order it in our local restaurants. Michael and his team have changed that.”

To establish the restaurant Harrison and his team took over, gutted and fully refurbished the space that once housed Blue Lobster and, most recently, Rags.

Harrison said: “Other than it being the same building I think people won’t recognise it from what was here before, as we have re-planned and redecorated the space with new fixtures and fittings and interior design that is stylish and tranquil, fitting and enhancing our location.”

There are also seven refurbished and decorated hotel bedrooms in the attached building that forms part of the Lawrence Complex.

It takes its name from the famous Lawrence of Arabia, TE Lawrence, who was stationed in the building for three months in 1934/5 after he had transferred to the RAF as Private TE Shaw.

Among the 30 new full and part-time workers taken on are chefs Richard Gardner and Steve Chandler.

Harrison added: “This hasn’t happened over night and we have taken our time and really waited until we got the right people in place, the people who have the same passion as us, the people who want to come to work each day not just to get paid but because they love what they do as much as us.”

More restaurants add to the offering at £70m city development

Bus travellers sets to be filled with the festive spirit

Burger and breakfast restaurant bites into a new city location