Celebrity nightclub Chinawhite is using its Manchester club as the springboard for a national roll-out.

The London brand, famous as the haunt of footballers and TV and film stars, opened its first venture outside the capital on Deansgate last November.

And as its first anniversary approaches, Chinawhite managing director James Spallone revealed the brand will open a third location in Newcastle next year based on their Manchester experience.

He said the ‘Manchester model’ is what will set the standard for further expansion.

Originally based in Soho, the London operation gained notoriety for its controversial door policy, with numerous allegations of racism and sexism.

Mr Spallone explained some of the reasons for the London venue’s poor publicity: “Clubs always come under immense difficulties from door policies concerning alleged racism, sexism, and ageism, even.

“We have an open door policy and there’s many reasons why people get rejected from any club. You can be at your capacity or you might have a night where most of the crowd is under 25 and a group of gents well into their 40s arrive, so you have to say, ‘maybe you might feel out of sync there’, and it can go the other way.

He said there is also a more inclusive feel about Manchester, compared with London: “There’s much less tourism here in Manchester – in London you can open 52 weeks and some people will only come once because they’re travelling. Here, we have customer retention and people come week after week.

“The attitude is more positive here. It is more social.

“You can get into a lift here and everyone will say hello. We have made really good friends up here.”

He explained: “The aim was to build something social.

“We have a lovely mix of clientelle, from sports personalities to TV people, but our focus is on the social side and mere mortals like me and you.

“It’s about building a core of people, and from there the growth comes naturally.”

“We’re beyond expectations for Manchester. We found a little bit of a niche.”

And he added: “I’m happy where we are financially. We’re slightly ahead of projections. Manchester has 65% of London’s turnover, but our pricing here is about 65% of London’s pricing, so we’re tracking London.”

He revealed a lot of thought went into choosing Manchester as their ideal first foray outside the capital: ”We did lots of research before coming to Manchester.

“We looked at Newcastle, Leeds, Birmingham, and Manchester came out top of the list straight away. It’s so vibrant and fast moving. It ticked all the boxes.”

And he said finding their location in the former Milton Club was a “happy accident”.

“We were sitting in a local restaurant and someone said there’s a site that’s become available, do you want to walk across and see it now?

“We saw the potential and it went very quickly and terms were agreed within a week.”

He said they soon realised the location was just right: “You have an idea in your head, and how it is going to work, but you need two or three months really to see how bodies flow through the building.

“The core we got right, but we have movable furniture so the club can be put into many configurations.

“Manchester seems to be an ‘after work’ scene and Friday is still exceeding our expectations.

“We’re full every Saturday, while Sunday is the same format as London. A tight-knit community and by invitation only.”

The club generally operates a 400-strong capacity, but regularly attracts more than 1,000 punters throughout the course of a Saturday night: “The trick is to get here early,” said Mr Spallone. 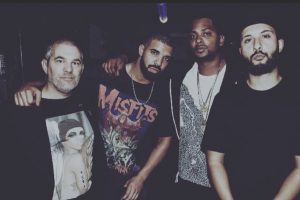 Chinawhite has already found its Newcastle location, a listed building that will require some renovation.

“We have done some basic plans. The idea is to start the build in July and be ready for October, but planning can be difficult.”

The business is keen to recreate the Manchester model for Newcastle. In 2014 Chinawhite opened a franchise operation in Belfast, which closed in 2018.

Mr Spallone said: “Belfast was a franchise deal and I didn’t think it worked for them. What we learned from it was we knew what we wanted and decided it was better to do it ourselves.

“We wanted to be in control of the brand itself and the operations. That’s another element where Manchester has worked for us because we have been in control.”

About 95% of the 30-strong Manchester workforce is local. Mr Spallone said: “It’s always important for us to get local people. We wanted to be a Manchester nightclub, rather than a London nightclub in Manchester.”

He said wherever the brand expands to in the future, it will have to move with the times to stay ahead of the pack.

“Nightclubbing, per se, is a difficult industry and the more fluid you become the more confident I am of the future.

“It has to be an element of theatre and entertainment.”

He envisages moving into new areas, such as screenings, product launches or private corporate dining.

“All nightclubs will need to be able to do other things than just music and lights.”

New venue starts recruitment drive for 120 staff ahead of Spring...